Swanning About at the NYCB Event 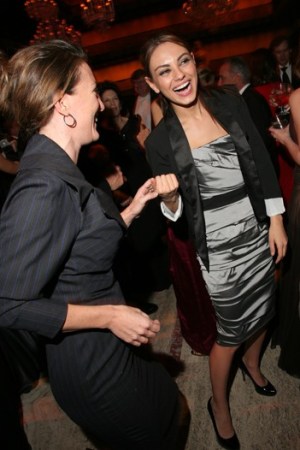 The evening began with a short video showcasing the work behind the newly renovated theater, courtesy of David Koch. The benefactor himself commented on the overwhelming attention he’s received for his generosity: “I don’t think they’ll be asking me to do this again anytime soon,” he said.

A trio of pieces followed, including the Rubies pas de deux from Balanchine’s “Jewels” performed by dancers from the Paris Opera Ballet and the world premiere of Peter Martins’ “Naive and Sentimental,” with costumes by Morgane Le Fay’s Liliana Casabal.

Portman kept to herself and skipped out on the black-tie dinner that followed, but her director, Darren Aronofsky, stuck around (the NYCB’s Benjamin Millepied is the movie’s choreographer).

“My sister was a dancer growing up and I was always in the background, so I always thought it would be a really interesting world to film in. And after wrestling and working with maybe the lowest form of art [in ‘The Wrestler’], it was kind of interesting to move to the highest form of art,” he said, adding that dance appreciation can be an acquired taste. “It’s taken a long time to develop an understanding of the details and the more you get exposed to it, the more complexity you see.”

Kunis, who’s been taking classes six times a week for the past four months in preparation for her role, admitted that prior to signing on, she wasn’t exactly a ballet regular.

Not so Fé Fendi who planned her Thanksgiving vacation around the event.

“I told my husband we had to come,” she said. “I have a 6 a.m. flight to London tomorrow — so I guess that’s my punishment!”