The Broadway star has written an autobiography, which puts her family and happy childhood front and center. 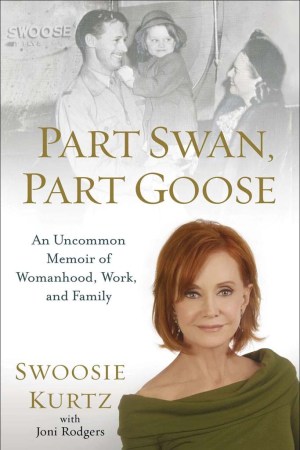 “There were no rules, really,” says actress Swoosie Kurtz of growing up with her parents. “They treated me as a person worth valuing whose opinions and views counted.”

Now the Broadway star has written an autobiography, “Part Swan, Part Goose: An Uncommon Memoir of Womanhood, Work and Family” (Perigee) with Joni Rodgers, which puts her family and happy childhood front and center. Her parents, Frank and Margo Kurtz, were luminaries, too. Her father, a champion diver as a young man, who was chosen for three Olympic teams and won a bronze medal, enlisted in the Army Air Corps a year before World War II began. He was one of the few survivors of the Japanese attack on Clark Field in the Philippines, shortly after Pearl Harbor, and became an ace pilot in a Flying Fortress called the Swoose, cobbled together from wrecked B-17s. The plane is the source of the actress’ unusual first name.

Her parents, as photogenic as they were accomplished, were drafted to do war-bond drives across the country, but Frank insisted on going back into combat, flying 60 further missions against Italy. He won the Croix de Guerre, three Distinguished Flying Crosses, three air medals and five Presidential citations. The Swoose was the last plane from the Pacific fleet to survive and is in the Smithsonian. At his request, his wife wrote a book, “My Rival, the Sky,” which was published in 1945. Excerpts from it appear throughout her daughter’s memoir. It is being rereleased as an e-book when Kurtz’s book is published today. Kurtz read from her book Monday night at the Roundabout Theatre Company at the American Airlines Theatre.

Her father, who became a real estate executive and motivational speaker after leaving the army, died at 85 in 1996 and received a long obituary in The New York Times. Her mother is 98. Kurtz, 69, who is an only child, is looking after her with a team of caregivers at her home in Los Angeles while she continues to appear on the CBS sitcom “Mike and Molly” and do other projects.

“I’ve been losing her gradually over the last seven years,” the actress says of her mother. “I felt, as she started to fade, that I was parenting more. There turned out to be something I never thought was there, a maternal, nurturing instinct. I’m a single working mother, although I never had children. I suddenly find myself the head of the family.”

“Part Swan, Part Goose” is also about Kurtz’s remarkable career. She went to the University of Southern California and the London Academy of Music & Dramatic Art, and she used an answering service called the Hayes Office, which was popular with actors. When she called in for messages about a part, the operator would optimistically chirp, “Nothing yet.” Because she was small and looked young, early in her career she was often cast as a teenager or even a child. Her first significant theatrical roles were in Paul Zindel’s “The Effects of Gamma Rays on Man-in-the-Moon Marigolds,” in which she appeared in increasingly larger parts from 1970 to 1972 as the play ran off-Broadway and then on Broadway. It won the Pulitzer Prize and the New York Drama Critics’ Circle Award. In 1975, she played 15-year-old Muriel in a revival of Eugene O’Neill’s “Ah, Wilderness!” on Broadway, while in 1977, she appeared in Wendy Wasserstein’s first play, “Uncommon Women and Others,” off-Broadway, along with Meryl Streep and Jill Eikenberry. In 1980, she played Honey in a production of Edward Albee’s “Who’s Afraid of Virginia Woolf?” at the Long Wharf in New Haven, with Mike Nichols and Elaine May as George and Martha and James Naughton as Nick. In 1981, she won a Tony, Drama Desk and Outer Critics Circle Award for appearing as Gwen opposite Christopher Reeve in Lanford Wilson’s “Fifth of July. ” She then went on to do a short-lived sitcom with Tony Randall called “Love, Sidney.” She prepared for a year to play the lead, Claudia, in Michael Bennett’s musical, “Scandal,” which never came to fruition. She won another Tony for the role of Bananas in the 1986 revival of John Guare’s “The House of Blue Leaves,” and in 1988, she was cast in the film version of “Dangerous Liaisons,” along with Uma Thurman (who played her daughter), Glenn Close and John Malkovich.

In 1991, she became one of the siblings, Alex, in the TV drama “Sisters,” which also starred Sela Ward, Julianne Phillips and Patricia Kalember. In 1995 she appeared in the film “Citizen Ruth.” She appeared as Hesione Hushabye in the Broadway revival of George Bernard Shaw’s “Heartbreak House” in 2006.

At the moment, “Mike and Molly” is a mainstay of her career. She says of Melissa McCarthy, who plays Molly, “She’s a dream. Just watching her work — her physical comedy, it’s just in her, it just comes out. She can just do anything they throw at her. She takes it and she spins, spins magic. She has so many colors, very sweet, very reasonable and flights of insane fantasy.”

Kurtz said before writing this book that she didn’t want to do a celebrity tell-all. Although she has had serious boyfriends over the years, getting married was never a priority, and she always knew that she didn’t want children. She says that, if she came out of the closet, it would sell more books, but it wouldn’t be true. “Why is it that people are so uncomfortable with the thought of a woman who is, by choice or not, alone?” she writes. “It seems to waffle between suspicion and sympathy. Is she the witch or the widow? Or just waiting for Mr. Right…a solitary woman must be Miss Havisham.”

The real anchor of her life, as it was for her father, has been her work. “My dad gave me singularness of purpose, hyper-concentration. Where it’s worked well for me is in the career. I wanted to be nowhere else but on a stage, such love, passion and obsession that it never occurred to me to divert to anything else. I never thought I’d be a star. I’ve turned down a lot of material over the years, even when I had no right to turn things down. But by following my bliss it worked out in strange, full-circle ways.”

For instance, when ABC offered her a sitcom version of “9 to 5,” she just plain didn’t want to do it because she didn’t think it would be good. They kept offering her more money, and the inflated figure where negotiations ended (she still wouldn’t do it) became her go-to quote for a sitcom. “When they offered me ‘Love, Sidney,’ they had to come up to the money that I had turned down. In my blind naïvete, I actually brokered a better deal for myself without even knowing it.”

As for creating a character, “I do a lot of real-life research, but for the most part, they’re fictional characters,” she says. “I really get visual cues, and what’s very important to me is the rhythm, cadence of how the character talks. I find it very difficult if I don’t hear the rhythm, cause it’s just crucial for me.”

Having a “brilliant” costume designer can be helpful, too. “If it’s a baggy sweater, it says a lot about the person who’s wearing it,” she continues. “Acting is an alchemy, it’s very intangible. In a rehearsal room, just try everything, fearless and fierce. And then go ahead and commit to something. The director will tell you if it’s terrible.”