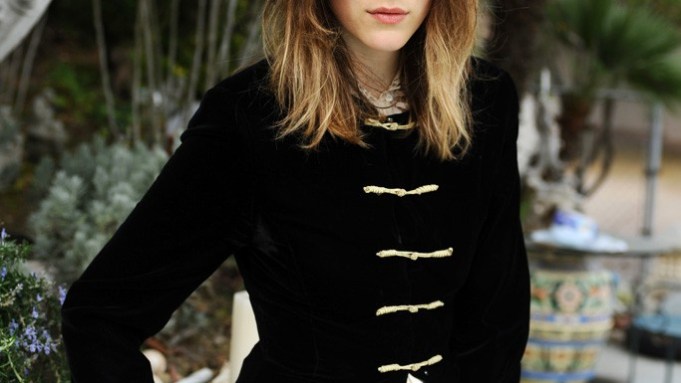 It was a natural disaster that prompted indie-pop songstress Clara Nova, née Sydney Wayser, to reinvent herself.

After Hurricane Sandy hit New York in October 2012, Wayser decided to ditch her flooded Brooklyn apartment and head west, adopting a new stage name and persona once she arrived back in her native Los Angeles. “I liked the idea of it being a new reincarnation,” she says now. “I was making more electronic and synth-based music, and when I changed my name, it helped me grow and liberate myself a little bit.”

A year later, the half-French singer is living la vie bohème in Laurel Canyon, sharing a house with a handful of fellow artists — musicians, producers, filmmakers. “We just live in Lauren Canyon, hangout, make music,” she says of her house, which has a recording studio in the basement. “It’s not that bad.”

Since moving west, Wayser’s musical persona has become more clearly defined. “She’s like one part cheetah, one part Joan of Arc, and loves David Bowie,” she laughs. Wayser ticks off other influences: Jeff Buckley, Serge Gainsbourg, Rufus Wainwright, Loudon Wainwright 3rd and Leonard Cohen, as well as strong women like Feist — and a certain bootylicious pop star. “People say that and I chuckle,” the 27-year-old says of her Beyoncé-esqe sound.

Though the comparisons to Sasha Fierce end there, her au naturel look screams hippie chick, not pop icon. “I’ve washed my skin morning and night since I was 12,” she says of her luminous complexion, “but not obsessively or crazy. My mom looks like my sister so she blessed me,” she adds.

Her sartorial choices are also decidedly more French-tomboy than glamazon. “I love a cravat, a blazer, a pair of pants, some nice flats and a vintage hat. I think a hat can make anything chic,” says Wayser, who grew up spending summers in Paris thanks to her French musician-filmmaker father, Jacques Wayser.

She has a taste for the finer things in life, too. “Every woman should wear Chloé. It’s just so strong and confident, but also billowy and feminine,” she says. She’s also particular when it comes to denim. “I need a very modern cut,” she says, citing favorites like J Brand, Vince and Seven For All Mankind.

After performing two sets during the Sundance Film Festival last month, the Berklee College of Music graduate is ready to focus on recording her first full-length album, due out next year. Wayser will also bring her blend of keyboards, tambourines and maracas to The Echo in Los Angeles on Feb. 18. “It’s from the heart 100 percent,” she says. “To have a different name makes me feel like I could do anything.”