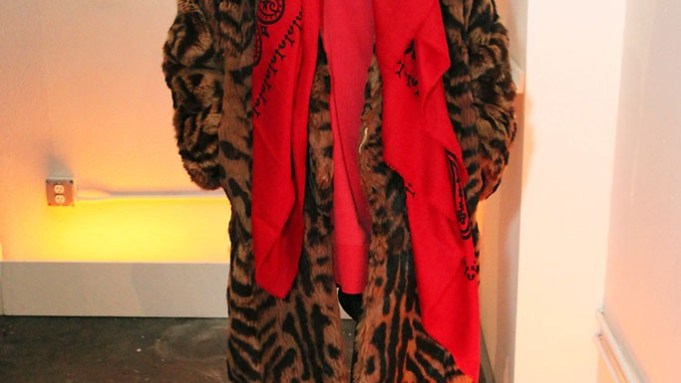 Erin Wasson, the fashion party MVP, was at a presentation Friday night at the Hotel Particulier in Lower Manhattan for the Los Angeles label The Elder Statesman. “I’m a grown-ass woman,” she said in response to a description of her walk during Alexander Wang’s show last season as sexy and confident. She said it like it was a given, like there was no other way for a woman to strut, down the street or down a runway.

Wasson is 32, a Texas native. She is spindly and loopy and tends to speak in bumper sticker metaphors, but she can unnerve with smart, out-of-nowhere observations that make clear she’s not your average Pollyanna model. The party featured some unusual set pieces — at least by the standards of New York Fashion Week. The clothes hung on a rotating rack, as if at a dry cleaners, and were draped on headless rubber mannequins that recalled condoms. The bartenders pumped beer from a keg. Outside the hotel sat a Porta-Potty designed by the label’s designer, Greg Chait. “He understands that authenticity is the new currency of life,” Wasson said of Chait. Authenticity is big with the model, and Statesman’s chill California vibe suited her own free-associative temperament.

“He’s giving us what we don’t often get to have in New York City, which is an experience,” she continued. So, does that mean every fashion week party needs a keg? “Authenticity is the new currency of life,” she repeated, as if what she was saying was self-evident. “A little bit of beer, some really good tequila, no fuss.”

How about those prophylacticlike mannequins?

“It’s also that plastic movement from the Sixties,” she said, suddenly rendering the suggestion of a resemblance a little dopey. “If you look at some of the art world of the Sixties many people were obsessed with this plasticized art form, so it’s quite inspiring actually.”

She started to flip through the pictures on her phone for something to prove her point, an image of an exhibit at the once famous Ferus Gallery, which operated out of California from the late Fifties until the late Sixties. But she stopped when she came across her own picture of the Porta-Potty.

“This is Greg,” she said excitedly. “Greg actually designed the f–king Porta Potty outside. Yeah! Hello! Helloooo!” Someone rushing to get past Wasson accidentally knocked down a mannequin as it was rotating by. She picked it up and hung it right back.