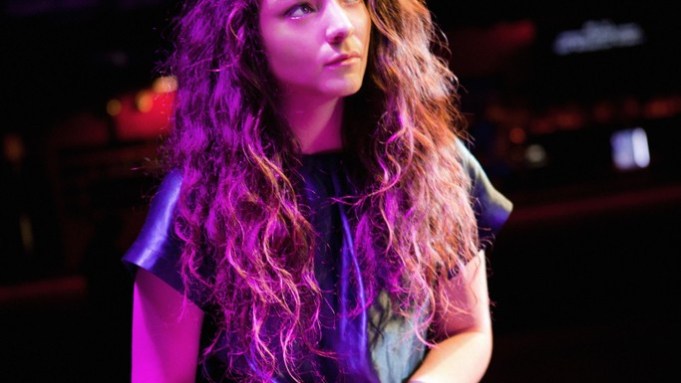 All Lorde wants is a nap.

The Internet-beloved New Zealand import is a bewitching singer with a deep, soulful voice who belts out catchy pop songs and haunting ballads with equal aplomb. Her first single, “Royals,” debuted at number one on the Top 40 in her home country, and she has since become the first New Zealand artist to have four songs on the chart simultaneously. The accolades have carried over to the U.S., where she has enough genre-busting Next Big Thing hype to land on sites ranging from Entertainment Weekly to the hipster music bible Pitchfork, and has earned enough buzz to warrant a select North American mini tour next month.

But on Tuesday night in New York, a few hours before her first Stateside show, Ella Yelich-O’Connor, the otherwise unassuming Auckland 16-year-old who happens to perform as Lorde, is secluded in her dressing room in the basement of the West Village club Le Poisson Rouge. She is 9,000 miles from home, and she is jet-lagged.

“I am so f–cking tired,” she announces, slumped in an oversize armchair.

“I love clothes, but I’m really lazy and also really broke all the time,” she says of her fashion sense.

About 30 people have packed into the venue’s cramped basement. Among them, a handful of industry types frantically reviewing schedules, a fleet of stylists toting six overflowing rolling racks (“I pulled a lot of vintage Moschino,” one proudly announced. “Straight from the archives.”) and silently tucked away in a small alcove, Yelich-O’Connor’s 19-year-old sister, Jerry. Yelich-O’Connor’s only companion for the trip, her elder sister is equally unfazed, paying more attention to her new iPhone than the madness all around her.

“IPhones are very expensive in New Zealand,” she explains, before quickly returning her own doll-like eyes to the new toy.

Upstairs, a line of gangly teens basking in the sun and snapping Instagram pics stretches down Bleecker Street.

“They’ve been here since 3 p.m.,” sighs a harried publicist.

Tuesday night’s show sold out almost immediately, with the venue hitting capacity at 800 people. If Yelich-O’Connor is aware of the chaos erupting just outside her dressing room, she’s certainly not letting it show.

There’s a brief pause in the conversation as she assesses her freshly drawn eyeliner.

“That’s rad,” she says. The estimation comes up again when describing her musical influences (“I love Grimes, she’s rad.”), as well as her recent prom.

“Yes, I went to my prom,” she says. “I wore this olive green, floor-length backless dress. It was rad.”

Despite trying to maintain the life of a normal high-schooler, Yelich-O’Connor admits that lately the line between Ella and Lorde has become less defined.

“My friends have been really chill about it,” she says. “But some people that I don’t know from school have been weird and snapped my picture. I’m like, ‘I saw you.’”

Online, Lorde boasts an impressive Internet persona with an active, and verified, Twitter account with more than 40,000 followers — a number that grows each day.

“All these people tweeting about me is probably the biggest indicator,” Yelich-O’Connor says of her trending fame.

Her online celebrity fan base reads like an offbeat pop culture laundry list. Selena Gomez, Chloë Grace Moretz, Jared Leto, Diplo and Jamie Lynn Spears are among those who have tweeted their support.

“Backstreet Boys is probably the funniest,” she says. “I was having a conversation with a bunch of friends and just said [on Twitter], ‘I want to write a boy band hit.’ And [the Backstreet Boys] were like, ‘You should. We would sing it!’”

It is worth noting here that Yelich-O’Connor was four years old when the boy band was at the height of its turn-of-the-millennium powers. The singer moves the conversation on to her first U.S. real-life celebrity run-in, which occurred the day before.

“I was doing this radio interview and the interviewer goes, ‘Don’t look, but R. Kelly is behind you,” she gushes with visible excitement. “I was like, ‘You’re joking.’ It was amazing. He had his entourage with him and was wearing a full green tracksuit.”

Hours later, the starstruck teen is back in budding celebrity mode herself. As she prepares to take the stage, concertgoers eagerly speculate about the mysterious singer.

The crowd is a myriad of cliques. Floral-crowned Coachella chicks mix with after-hours business bros with ties tucked into their back pockets. The record execs hang toward the back, attached to the bar. Le Poisson Rouge is an 18-plus venue, everyone shares at least one common denominator. They are all older than the night’s headlining act.

Taking the stage at 9 p.m. sharp, Lorde appears in an all-black witchlike getup from the Stevie Nicks school of stage wear, and her own signature mess of curls.

“F–k, I need a perm,” bemoans a stage-adjacent fan.

Launching into her first song, “Bravado,” Lorde barely stops to take a breath, offering crowd favorites (“Royals,” “Tennis Court”) and debuting new tracks (“Still Sane,” “Ribs”) with equal confidence. The 11-song set is light on dramatics, focusing solely on her voice, which sounds even more clear tonight than on her debut EP. It’s easy to forget that a few short hours ago she was backstage describing her prom dress as “rad.” Midway through the set, though, the scent of marijuana hits the room and the teen lets her real age show briefly.

“I can smell it,” she quietly giggles into the mic, before quickly segueing into her next song.