The Breakout Brits of ‘Pirate Radio’ 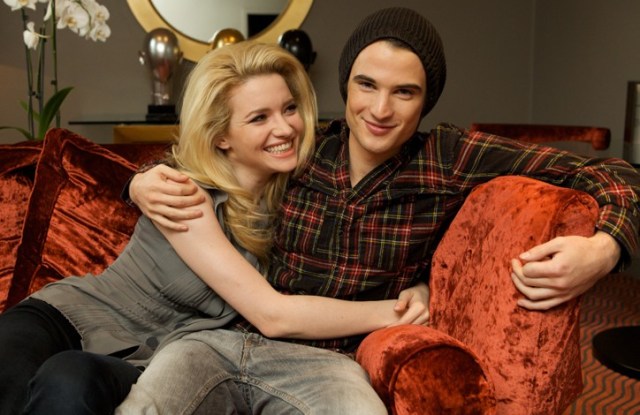 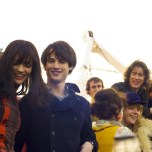 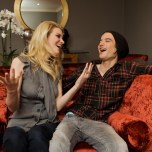 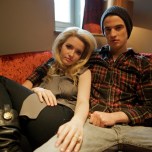 On Friday, newcomers Tom Sturridge and Talulah Riley appear on-screen in the kooky ensemble film “Pirate Radio,” a comedy about a colorful band of DJs who blasted out rock ’n’ roll to the music-starved masses of Sixties England. The film, written and directed by “Love Actually” helmer Richard Curtis, flopped in London theaters last spring, but has been shortened and reedited for the U.S. This time around, the focus is less on history and more on that merry band of music makers who broadcast from old ships anchored in the North Sea.

Sturridge and Riley — who star alongside Philip Seymour Hoffman, Bill Nighy, Rhys Ifans, Kenneth Branagh, Emma Thompson and January Jones — were recently in London for the annual film festival and spoke to WWD about Godard, physics and the perils of filming at sea.

BACKGROUND: Sturridge’s father is the television director Charles Sturridge (“Brideshead Revisited”), and his mother is the stage actress Phoebe Nicholls, but he claims he avoided acting for as long as he could. “I was quite against it, and it was the last thing my parents wanted me to be doing. I was so afraid of becoming a cliché, but unfortunately, I ended up becoming one,” he says with mock regret. But it was clear from the start where life was going to take him. “When I was younger, I was obsessed with European film — early [Jean-Luc] Godard and István Szabó,” he says.

BIG BREAK: “A friend’s parent was casting ‘Being Julia’ and was looking to hire an actor, but they couldn’t find a suitable 17-year-old boy. I got the job on a fluke.”

ON FILMING “PIRATE RADIO”: “Richard has an encyclopedic knowledge of pop music from 1945 to 2009. He’s verging on autistic. He introduced us to the B-sides of albums by bands we’d never heard of.”

ON HIS CO-STARS: “It was like if you’re a trainee doctor and you meet the leading neuroscience doctor — you essentially want to impress them. If you spend a lot of time with any person, though, you see them as the fragile people they are. They lose their sheen.”

EXTRACURRICULAR ACTIVITIES: “I’d love to say ornithology. You know, ‘I love falcons.’ But I do the same as everyone else to stave away apathy.” Mostly, that’s reading. Sturridge just finished Roberto Bolano’s “The Savage Detectives,” and has just picked up a copy of “Legend of a Suicide” by David Vann.

UP NEXT: “Waiting for Forever,” which was shot in Salt Lake City and is due out next year. “It’s about a homeless street performer stalking a girl,” he says. “It was a low-budget film shot in 18 hours.”

BACKGROUND: Riley’s mother is a retired security consultant, and her father is a former chief of Britain’s National Crime Squad who now writes crime dramas for British television. Riley began acting professionally the day after she graduated from high school, and is best known in Britain for her role as the sensitive Annabelle Fritton in the TV and big-screen versions of “St. Trinian’s.” She also appeared opposite Kevin Spacey and Jennifer Ehle in “The Philadelphia Story” at London’s Old Vic theater in 2005.

BIG BREAK: 2005’s “Pride and Prejudice” with Keira Knightley. “Joe Wright was looking for unknowns to play the Bennett sisters and I played Mary. I was bookish and nervous — that’s probably why I was cast.”

ON FILMING “PIRATE RADIO”: “Some of the cast got seasick, but I loved being on a boat. We did all kinds of fun things. I remember playing golf in high-heeled shoes. Music was playing all the time.”

ON HER CO-STARS: “The boys played a prank on me in the cabin that’s used as a mortuary,” she says. “Rhys invited me to come and see it. I had a big glass of Ribena [a nonalcoholic blackcurrant drink] in my hand. I found Chris O’Dowd lying on a slab, covered in white paper towels. I screamed and my Ribena went everywhere. It looked like blood. Richard helped me clean up, as all the boys had scampered.”

EXTRACURRICULAR ACTIVITIES: Before moving to Los Angeles to be with her fiancé, Elon Musk (the 38-year-old co-founder of PayPal), she was studying physics at London’s Open University. In between acting projects, she’s squeezing in classes at CalTech in Pasadena. “I think [studying physics] is the only real way to answer questions, and I think it’s a really exciting time. The next big leap in understanding is imminent, and I’d love to be involved in some way.”

UP NEXT: “Inception,” written and directed by Christopher Nolan (“The Dark Knight”) and starring Leonardo DiCaprio, Ken Watanabe and Marion Cotillard.