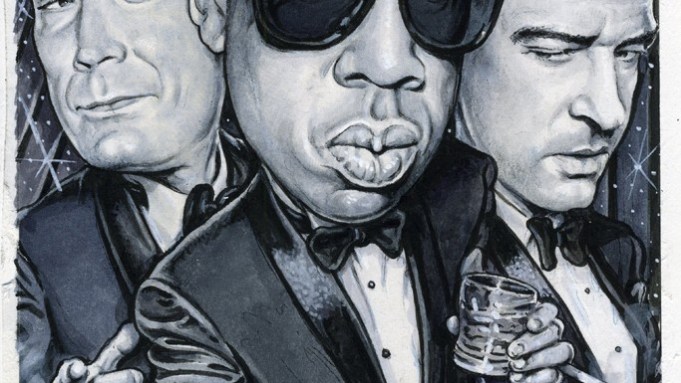 There’s a sequence at the beginning of Justin Timberlake’s “Suit & Tie” video that stops me cold every time I see it. I’m sure you’ve seen it too, since the marketing campaign for the performer’s album The 20/20 Experience has bordered on harassment, but maybe you haven’t really noticed it.

In the scene, JT is hanging out with Jay-Z, who is featured on the track, in what looks like a hotel suite, judging from the number of fruit baskets in the shot and the minibar-size bottles of liquor arrayed on the coffee table.

Jay-Z is in the foreground, lounging on a couch, watching basketball on a flat-screen. In one hand, he holds a rocks glass that looks like it contains Scotch neat. In the other, a cigar. It’s the kind of imagery that you’d expect from a man whose oeuvre includes songs called “Can’t Knock the Hustle” and “Regrets.”

Timberlake is in the back of the shot but he’s not smoking or drinking. Dressed in a checked button-down shirt that looks like it came from the wardrobe of Woody from Toy Story, 32-year-old JT is spooning something into his mouth from a cereal bowl that he’s palming. Juxtaposed with Jay-Z’s breakfast of champions, the cereal bowl (along with the Howdy Doody shirt) makes him look like a kid.

And that makes it really difficult for me to suspend disbelief for the David Fincher–directed, Tom Ford–costumed Rat Pack–meets–“Singin’ in the Rain” fantasy that follows.

“Let me show you a few things,” Timberlake sings as the camera cuts to him performing at a nightclub in a beautiful tuxedo and a new haircut that makes him look his age. And what he does show me is that he’s a supremely talented entertainer capable of emulating that 1960s Las Vegas vibe without bringing much of his own to the party aside from a few Michael Jackson–style dance moves. It’s a performance that manages to be sophisticated visually and adolescent artistically.

The Rat Pack has endured as a cultural touchstone for succeeding generations of men because its members brought so much personal baggage to their performances. They had lived and loved, succeeded and failed—and their songs were freighted with the wisdom and bitterness that came with those life lessons.

Or take another man with a beautiful falsetto like Timberlake’s: In 1978, Marvin Gaye was in his late thirties when he released Here, My Dear, a double album conceived as an alimony payment for his ex-wife, Anna Gordy. In this audio memoir of a failed marriage, Gaye’s voice is as sweet as ever but his subject matter is not. Here, My Dear, a commercial and critical flop when it was first released, is now hailed as a rough-hewn masterpiece of incredible honesty. It will only deepen your appreciation of Gaye and his work if you listen to it.

“Suit & Tie,” the song and the video, reveal little to me about Timberlake’s perspective on life except that it’s all good and, if the interpretation I’ve seen of his use of the word “fatty” in the lyrics is correct, that he appreciates his wife Jessica Biel’s curvaceous ass.

Have we entered a Peter Pan era of masculinity in which the symbols of American manhood—our pop stars, movie actors, and even political figures—come off like boys in men’s suits? While female artists as different from each other as Taylor Swift and Fiona Apple wear their hearts on their sleeves, the guys are behaving like Teflon-coated teenagers: well-groomed, eager to please, inscrutable.

The public seems to like it, too. The “History of Rap” videos Timberlake has created with his pal and confrere Jimmy Fallon, who is still giggly at age 38, amount to a Kidz Bop–style medley of vintage hip-hop—they’re pure emulation curated for the college crowd—but they’ve gotten millions of views.

It’s as if our citizenry is so overburdened with debt, war, and weather-related disasters that it prefers its pop culture to be delivered in easy bites that indulge our nostalgia and don’t require us to think. Bob Dylan or Leonard Cohen need not apply.

Manhood doesn’t really begin until the son figures out how to emerge from his father’s shadow, and Timberlake still seems to be struggling with the show-business giant that sired him: the Walt Disney Company, a corporation dedicated to extending adolescence into perpetuity and then monetizing it.

I was convinced he had broken free of his PG-13 bonds in 2006 when he released his accomplished second solo album, FutureSex/LoveSounds, and starred as the dumb two-bit drug dealer Frankie in Nick Cassavetes’ Alpha Dog. Both the album and Timberlake’s performance revealed something about the man.

But “Suit & Tie” feels like a regression. In fact, it’s not so different from another much-discussed performance featuring Timberlake—one from his Mickey Mouse Club days in the mid-1990s.

Type his name and “Cry for You” into any search engine and up comes another example of the adolescent posing as a worldly dude. This time, Timberlake and his fellow Mickey Mouse Club members are performing the Jodeci slow jam in the regrettably baggy and beige fashions of that moment.

Timberlake, who was in his early teens when he shot this segment, makes the little girls scream with his matinee-idol voice and his grown-up posing. Almost twenty years later, he hasn’t changed all that much.

Someone else in the video has changed, however.

Also singing “Cry for You” is a young Ryan Gosling, who was on The Mickey Mouse Club at the same time as Timberlake (along with Britney Spears and J.C. Chasez). Although Baby Goose, as the ladies like to call him, and JT are roughly the same age, Gosling looks goofily childlike in the video—he could have easily been a stand-in for Macaulay Culkin in Home Alone—and his boy-band hand moves are pretty ridiculous.

But that was then.

Like Timberlake, Gosling has evolved into quite the fashion plate. Unlike his fellow Mickey Mouse Club alumnus, he has put his Disney past well behind him. Weirdly, it was also a Cassavetes movie, the 2004 romantic weeper, The Notebook, that enabled Gosling to graduate to the adults’ table and secured for him a devotional female following. But rather than use the surprising (but still largely cult) success of that movie to star in a bunch of crappy big-budget rom-coms, Gosling has, instead, become our contemporary Clint Eastwood via a string of influential indie movies and, up next, his directorial debut. (Eastwood had his embarrassing Rowdy Yates period on Rawhide, Gosling had The Mickey Mouse Club.)

While Timberlake has cast his net wide—see Saturday Night Live—Gosling has gone deep: the strong, silent type with a slow-burn stare and a dry-ice sense of humor. If you’ve caught Gosling in Derek Cianfrance’s harrowing Blue Valentine or The Place Beyond the Pines or in Nicolas Winding Refn’s Drive, then you know that the cinematic persona he has developed is sui generis.

Gosling brings a wider emotional bandwidth to the screen than Eastwood did during his Man With No Name/Dirty Harry heyday. In The Place Beyond the Pines, his Luke Glanton character wears leather jackets, ripped-up heavy-metal T-shirts, and a lot of tattoos. (Those Mickey Mouse Club boys do tend to go heavy on the fashion symbolism.) And yet, despite the tough-guy imagery, he sheds a tear in church for the illegitimate son he discovers he has fathered. He also makes some difficult decisions and fateful mistakes based on his sense of responsibility for this child.

I don’t wear heavy-metal T-shirts or tattoos, but Gosling’s hard-bitten (if squeaky-voiced) portrayal of manhood in The Place Beyond the Pines felt authentic to me and to my 16-year-old son as well, who rolls his eyes at Justin Timberlake—Fugazi and The Dead Boys are more his speed—and asked me to see the movie with him.

There is a moment in “Suit & Tie” when the complexity of contemporary manhood is broached, but it doesn’t happen while Timberlake has the mic. It’s Jay-Z who brings the gravitas in his rap, a boast about his genre- and culture-transcending power that ends in a brief meditation on that most challenging aspect of manhood: love and marriage.

Tell your mother that I love her cause I love you
Tell your father we go farther as a couple
They ain’t lose a daughter, got a son
I show you how to do this, hun

Jay-Z’s time in the spotlight is the one aspect of “Suit & Tie” that does exude the seen-it-all soulfulness of the Rat Pack, beginning with the very Sinatra moment that Hova, drink in hand, takes his good goddamned time getting up off his stool to deliver his rap.

Jay’s interlude, by the way, contains the best lines of the track:

This is truffle season
Tom Ford tuxedos for no reason

That’s “My Way” in a hip-hop couplet, the words of a pauper, a pirate, and a poet who has earned the right to dress like a king.