Lynn Cox is not just out for a balmy swim. 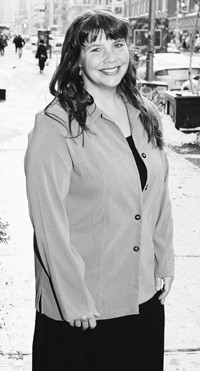 NEW YORK — Every woman, whether out of personal taste or due to seasonal dicta, has colors she wouldn’t be caught dead in. But endurance swimmer Lynne Cox, who broke the world record for swimming the English Channel when she was 15, has colors she avoids because they might be deadly — literally.

“I don’t wear striped bathing suits because the way the stripe flashes in the water might lure sharks, and you don’t want to get eaten. I don’t wear black in the water either because I wouldn’t want a killer whale or a 1,000-pound leopard seal to mistake me for a penguin or a seal and have me for lunch,” says Cox, sitting down to a salmon lunch at Odeon in TriBeCa. “And just to be on the safe side, even though I don’t know whether those predators are color blind or not, I won’t wear red in case it reminds them of blood.” Talk about killer fashion faux pas.

Last week, Cox kicked off her 12-city cross-country book tour for “Swimming to Antarctica” (Knopf), her gripping memoir of groundbreaking solo odysseys across the Earth’s most remote and treacherous waterways, culminating in the South Pole swim in 2002. And the option offers from Hollywood are already starting to pour in. No wonder: Narrated in sparse language that lets her death-defying adventures speak for themselves, the book chronicles Cox’s evolution from a child swimming in cold-water lakes in Maine through her teenage discovery of her unique long-distance swimming talent to her epic crossing of the Bering Strait between Alaska and Siberia (and that at the end of the Cold War in 1987).

With a superhuman main character possessed of the ability to persevere no matter the obstacles, the story has all the elements of a Shackleton endurance blockbuster. Cox’s fans already include authors Caroline Alexander and Oliver Sacks, as well as fellow swimmers Ronald Reagan (“the President had been a lifeguard on Santa Monica beach,” she says, “so we talked like jocks”) and Pope John Paul II (“The Pope grew up swimming in Poland and he told me his favorite places to swim in Italy, which is how I ended up crossing Lake Como.”)

Prior to her biggest coup to date — swimming to the Antarctic mainland — Cox navigated a sewage-filled Nile where she swam among dead rats and dog carcasses, as well as oil slicks; bumped into a load of rotten cabbages as she crossed the English Channel, and outfitted her coaching team with spear-guns to deter sharks that tailed her in the water.

“A long-distance swim is like climbing Everest horizontally,” Cox explains. “You need to get acclimatized to the cold temperatures. You need to be aware of unexpected deep wave troughs you can disappear into just like a mountaineer can fall into a crevasse.You can lose your sense of direction and get disoriented. You can get hypothermia, and you have to be aware that the weather can go from calm to deadly in 20 minutes.”

Scientists credit Cox’s ability to swim miles in freezing waters to her special facility to slow down the blood flow to her extremities and her skin while keeping her core — her heart, lungs and brain — warm. She also keeps up her muscle mass and has a well-distributed layer of body fat, which she says acts like insulation, “just as blubber does in whales and penguins,” which thrive in cold regions.

“By acclimatizing myself over years and years to colder and colder water, I’ve been able to lower my body temperature from a standard 98.6 to 97.6 degrees. What that means is that, whereas other people couldn’t swim in 50 degree water, I can swim for four hours and, at the end, my temperature will have gone up to 102 degrees. I produce more heat than I lose,” says the 47-year-old phenomenon, who still swims regularly.

Now that she’s on her first book tour, Cox is free to wear red, black or any other color that might attract carnivorous mammals. She’s found she favors basic pieces from Chico’s “because they travel easily and don’t have to be ironed after you unpack them,” she explains.

“I was hoping I could get Chico’s to sponsor my book tour by giving me some clothes to wear when I talk, but I never heard back from them,” says the ever-practical swimmer. In the past, Cox has enlisted support for her swims at one time or another from such diverse personalities as the late Armand Hammer and Ted Turner. One suspects the determined swimmer will be giving Chico’s another call.