The Preatures Talk Music and Fashion

After the band's set at Coachella, they kicked back at the nearby Fuse TV house, where lead singer Isabella “Izzi” Manfredi reflected on their performance. 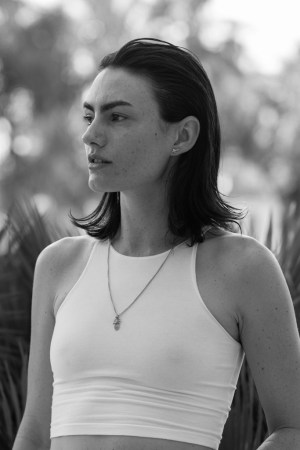 After The Preatures’ Friday afternoon set at Coachella, they kicked back at the nearby Fuse TV house, where lead singer Isabella “Izzi” Manfredi reflected on their coming-out performance. “It’s always really difficult to be incredibly positive about a show unless I feel like I’ve really nailed it. I’m never satisfied,” says Manfredi. “I can’t really understand why we’re here,” she muses.

To be sure, the Sydney-based fivesome — which includes Manfredi’s bandmates Gideon Bensen, Jack Moffitt, Thomas Champion and Luke Davison — have come a long way from playing “pretty bad” Patti Smith and Rolling Stones covers five years ago. “Before I met these guys, I had really no designs on singing. It was something that I never thought I would be good enough to do, ever,” says Manfredi, whose father was also a musician. After toying with the idea of becoming a professional stage actress, she decided to study to be an English teacher instead, a natural transition to lyricist. “Pop writers are poets, whereas in the rock world they’re very dismissed, and I think that’s changing, which is exciting,” she enthuses.

After performing at South by Southwest, the band stayed behind in Austin, Tex., for three weeks to work with producer Jimmy Eno at his studio Public Hi-Fi. “There’s an effortlessness to [Eno], which is very hard to create and force, so that’s cool,” Manfredi notes. But still, she’s itching to return to the Sydney studio where they recorded last year’s EP, “Is This How You Feel?”

“We’ve got to finish the record,” she says of their highly anticipated debut album, due out in the fall, explaining that lead guitarist Moffitt produces and mixes while she focuses on vocals. “There’s a lot of carryover from the EP ‘Is This How You Feel?’ in terms of influence, but at the moment I’m writing to Blood Orange, Dev Hynes, Solange,” says Manfredi, who also has been inspired by Bryan Ferry’s synths, David Bowie’s “Low,” “influential” 2012 records like Cat Power, Chairlift, Metronomy and Here We Go Magic, and fellow Aussie artists including Flume, Flight Facilities and Elizabeth Rose. “The scene in Sydney is so heavily electronic, so even though we’re a rock ’n’ roll band, there’s a natural crossover.”

Manfredi, who has spent almost every waking moment with her bandmates over the last few months, is looking forward to getting some much-needed girl time off the road. “I’m very much one of the guys, and I’m very much not one of the guys. I think that’s what every woman in bands experiences. You assimilate and you accommodate because you’re the minority, and it’s always going to be like that,” she says. “The hardest thing is that men don’t care if things are organized, so they don’t get upset; you do. You start to take on the role of mom, which is a bloody pain in the ass,” she says with a laugh.

Being surrounded by four men in skinny jeans and leather jackets has also affected the raven-haired vocalist’s clothing choices. “There has to be uniformity with the guys. I got over trying to incorporate high fashion into my look a long time ago because it just doesn’t work practically. I need to be able to move onstage and kick my legs up and roll over myself, and if I’m in a Miu Miu shirt or a silk blouse, I don’t have helpers to go wash that for me,” she says. For her performance at Coachella, Manfredi rocked a standard Nineties-inspired look, complete with a white cropped top, high-waisted jeans and a flannel tied around her midsection. “If I was here as a guest I would be in full boho garb because that’s me really at the heart. [I’m] incredibly sentimental and romantic. I love pinks and roses and beautiful things and gorgeous prints and color and all of that,” says Manfredi.

But her “music character” prefers a more “minimal approach. I’d love to be more adventurous with what I wear, and sometimes it upsets me that I can’t do that on the road,” she laments, adding that she brought a gingham Prada suit with the best of intentions. “I have not worn it once,” she says.

As her style evolves, so does her sound. “Rock ’n’ roll is about what’s pushing forward and having things be exciting and raw and feeling part of a movement. In the last 18 months, the whole music industry has done a complete about-face, and it does feel like something’s happening,” she says. “I just love the refocus on production and the refocus on the romantic side of pop because I love pop.” But should things not go as planned, Manfredi has a plan B. “After this whole thing blows over I’ll go back and be an English teacher,” she says, insisting, “I’m serious.”