At 11:30 on a Wednesday night, Elaine Kaufman is sitting at a table in her Upper East Side hangout, dishing about two of her patrons. 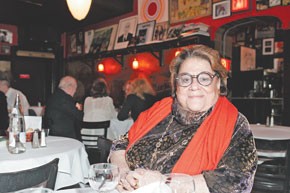 NEW YORK — At 11:30 on a Wednesday night, Elaine Kaufman is sitting at a table in her Upper East Side hangout, dishing about two of her patrons.

“Felicity Kendal was voted the best rump in London,” Kaufman says of the British actress, who is dining nearby with a group that includes Bill Nighy, the star of “The Vertical Hour.”

“Nighy’s from that generation of English actors who had to disrobe in all of their earlier movies, like Helen Mirren. He apparently has a sensational body.”

For 15 minutes, Kaufman has been trying in vain to make eye contact with the two actors, attempting to convey, as if by telepathy, that they should make a place at their table for her. But it’s just not happening. And so if Kaufman can’t talk to them, she can at least talk about them.

She is a repository of gossip, random trivia and memorable encounters, this Elaine. For 43 years, the best and the brightest have come to her Upper East Side saloon to booze and schmooze. Gay Talese, Norman Mailer, Lauren Bacall, Simone de Beauvoir, Jackie Onassis, Lewis Lapham and Andy Warhol, just to name a few. Many of the faces have changed, but the place has not. It’s like the Statue of Liberty or Don King’s hair — one of those totally reliable New York things that always remains the same, leaving you to marvel that it’s exactly as you last saw it, no matter how much time has elapsed.

Every few years, a restaurant opens and someone proclaims it the new Elaine’s, but six months later, people get tired of it. And so they return to Second Avenue and 88th Street, where the liquor flows, where cops and politicians and newspaper reporters and movie stars intermingle, where the kitchen stays open until 2 a.m. and where the hostess is always there to welcome them back home.

For this reason, Kaufman says she’s not worried about the current migration of the bold-face crowd to the Waverly Inn, where Gwyneth and Sienna and Harvey and Mariah have been ensconced since mid-December, when it had its soft opening.

This story first appeared in the March 13, 2007 issue of WWD. Subscribe Today.

“I’ve been here a long time,” she says. “New York just rolls around. There’s something for everybody.” And how concerned could she be, really? The Waverly Inn is owned in part by Graydon Carter, the editor in chief of Vanity Fair, and he’s a very good friend. “I’m crazy about Graydon,” she says. “We have a lot of fun together.”

Plus, the decor of his joint was clearly inspired by her saloon. Carter even admits it: “We completely stole the lighting she has in the front room, which, to my mind, is the most romantic lighting in the city. We’d steal Elaine herself if we could.”

Hearing this almost brings a smile to Kaufman’s face, which is an event in and of itself, since she normally emits about as much exuberance as the sphinx. Kaufman is a large woman whom her customers affectionately call “the fat lady,” about 5 feet 5 inches, with a big pouf of dark brown hair and oval-shaped glasses the size of silver dollars. The dress she’s wearing tonight — like all the dresses she wears, really — is almost indescribable, an amorphous caftan-like thing that starts at the bottom of her neck and goes to just above her shoes. Then there is the jewelry: the diamond butterfly brooch, the chunky gold bracelets and the pièce de résistance, a massive gold ring with an etching of Mars, the God of War. It’s a fitting metaphor for a woman who, from time to time, has literally taken her most boorish and inebriated customers and tossed them out with the trash.

Kaufman once punched a customer who’d sworn at her, and he sued. The charges were later dropped. Another time, in 1978, photographer Ron Galella was shooting the cavalcade of celebrities entering and exiting the place when Kaufman threw a garbage lid at him. “It missed and hit the fender of a limousine instead,” recalls Galella, who kept on shooting and got a hilarious shot of Kaufman just as she launched the scud missile at his head.

“I sold it to New York magazine and they ran it in the Intelligencer,” Galella concludes. “She was nice to me after that.”

Kaufman puts such incidents in the past. “At a certain point in therapy,” she says, “I learned that I didn’t have to always defend myself. It was like the light finally went on. It was awesome.”

These days, she has a kind of laissez-faire, c’est-la-vie attitude, though vestiges of her old self reemerge, particularly when she talks about food critics, who have been more or less unanimous about her kitchen’s shortcomings over the years.

“Mimi Sheraton said we put too much cream in the fettuccine Alfredo,” says Kaufman, with a roll of the eyes. “Well, excuse me.”

And don’t get her started on the Zagat survey, which she swears is rigged. “The Zagats have never even been in here,” she says. “Not once. But they realized they could get a headline out of being negative. Lots of people wrote to them to say nice things and they didn’t run any of their quotes. I finally sent them a cease-and-desist letter. I don’t pretend to have a fancy kitchen, but it’s good, solid food, it’s healthy, and you could eat here six or seven nights a week.”

Of course, if the Waverly is the new Elaine’s, one notable difference is that foodies seem to approve of the current restaurant du jour. But, at any rate, reviews have never had any discernible effect on Kaufman’s business. As Liz Smith says, “I’ve never been mad about the food, but that’s not why you go there.”

Dave Zinczenko, the editor of Men’s Health and one of the place’s younger regulars, puts it somewhat more diplomatically: “To me, it’s more than a restaurant. It’s a family with an eclectic cast of characters, plenty of drama and lots of good times. When I started going there, I was the new guy in a hostile town. Now, I’m a regular in a friendly town, and Elaine is a big part of the difference. She’s connected more people than Match.com.”

Indeed, there have been hundreds, ranging from the fabulously successful (the writer Bruce Jay Friedman and his wife, Patty) to the collapsible (Woody Allen and Mia Farrow).

Others have preferred to use the place merely as a pick-up joint, and when they did, there was never any shortage of tail for them to chase. “Warren Beatty was a f—ing killer in his day,” Kaufman recalls. “The young girls would go and sit on his lap. I’d walk over and say, ‘Is this OK?’ And he’d say, ‘It’s OK.’ Sinatra was the same way. Very playful.”

Presiding over this was not Kaufman’s favorite part of the job. She deplores what she calls “silly women,” the kind who laugh at every bad joke they’re told and desire nothing so much as the ability to be an appendage of a man.

“Growing up in Queens,” she says, “I was always looking to get out. I had no idea what I’d become, but I didn’t think I would be a housewife. My parents had a business, a store, and my mother worked in it. Having a job just seemed very natural to me.” Though she married once — “to a Limey, in the Eighties” — she never considered having children. “These are my kids,” she says, looking out at the restaurant, which is remarkably packed, given that it’s after 12 on a school night.

At 77, does she ever think of retiring? “Oh, no,” she says. “No way. That’s like signing your death certificate.”