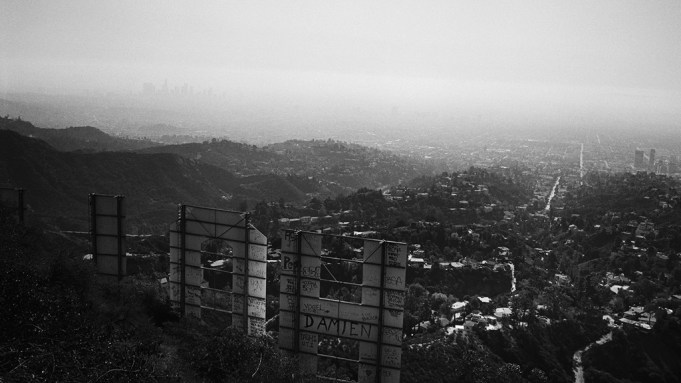 The catalogue of female beauty captured over the years by photographer Peter Lindbergh verges on encyclopedic, from supermodels to screen stars. Ask if there’s anyone left for him to photograph and he’s hard pressed to come up with an answer. Among his favorite photos from this vast portfolio of the professionally pretty is a rather undazzling — at first glance — shot of Amber Valletta on a terrace in Rockefeller Center, enveloped in an oversize sweater, gazing intently at the camera.

“I don’t know why I like it so much. There are no special effects to it or anything extraordinary,” mused Lindbergh, who has affinity for the understated and nonglossy that permeates his work. “I think it’s her magic expression. You always try to capture that magic.”

That 1993 image of Valletta is included in a small show of Lindbergh’s works at 5A E. 78th Street, the exhibition space operated by Vladimir Restoin Roitfeld. Opening this weekend and on view through Oct. 4, the installation includes 35 black-and-white portraits, landscapes and fashion editorial work, stretching back to the Eighties.

“It’s not so much fashion-fashion. It’s a rather poetic mix of images,” said Lindbergh. Adding a high-minded literary element to the exhibit is an accompanying spoken-word recording by poet Forrest Gander.

Still, fashion fans will find some very familiar images to view firsthand. There is the famed group photo of Christy Turlington, Linda Evangelista, Tatjana Patitz, Estelle Lefebure, Karen Alexander and Rachel Williams horsing around in white shirts on the beach in Santa Monica, Calif. (Class photos were something of a specialty for Lindbergh during the late, great supermodel era.) Then there’s the seminal photo of a fresh-faced Kate Moss in overalls from 1994. And an evocative shot of Yasmin Le Bon carrying bread through the streets of Paris in 1985.

“It makes people tempted to erase every sign of life in the face,” he observed. “People say it makes a woman dream of perfection. I say that’s not a dream, that’s a nightmare. When you look in the mirror now, you feel like an old potato, even if you look great.”

Lindbergh himself shoots with a digital camera — there’s no choice in today’s age, he said — but he uses Photoshop to add graininess to his images, rather than delete imperfections, so that they resemble film. “It makes it look much more human. More soulful,” he explained.

Lindbergh’s latest project is far removed from the world of fashion. Since the beginning of this year, he’s videotaped a quartet of death-row inmates for a future gallery exhibit. “I have them look at themselves in a mirror for thirty or forty minutes, with no cuts or editing,” he explained.

“It’s people who have finished their appeals, so for sure they will be electrocuted.” The first convict filmed by Lindbergh, Elmer Carroll, was executed in May in Florida for raping and murdering a 10-year-old girl.

Lindbergh’s aim is to humanize his subjects, despite their crimes. He acknowledges that it’s a tough sell.

“It’s a chance to look at someone who has done the most incredible crimes and see him for a human being,” said Lindbergh, who hopes to film another four or five entries in the series. “I think you feel that these people are victims too.”