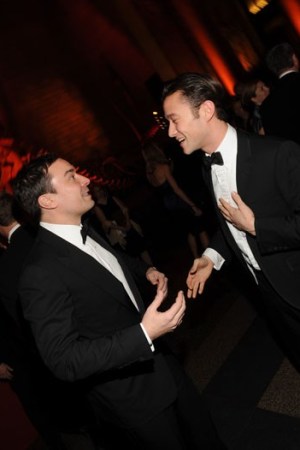 It was a virtual NBC reunion on Thursday night at the American Museum of Natural History’s annual Gala, when event chairman Lorne Michaels wrangled his coterie of “Saturday Night Live” players — including Andy Samberg, Kristen Wiig and Fred Armisen — and other network stars such as Alec Baldwin, Tom Brokaw and Jimmy Fallon for the fund-raiser. (Non-NBCers such as Caroline Kennedy Schlossberg, Bono, and Tom and Kathy Freston were also in attendance.)

Dave Matthews Band, slated to perform on the weekend’s episode of “SNL,” served as the evening’s musical talent. Naturally, the night was not without a few laughs. Fallon treated the audience to his best Brokaw. “After working at NBC long enough, we all start sounding the same,” the TV host said, mimicking the anchor’s distinct, low mumble.

“That was a third-rate imitation, Jimmy,” Brokaw shot back.