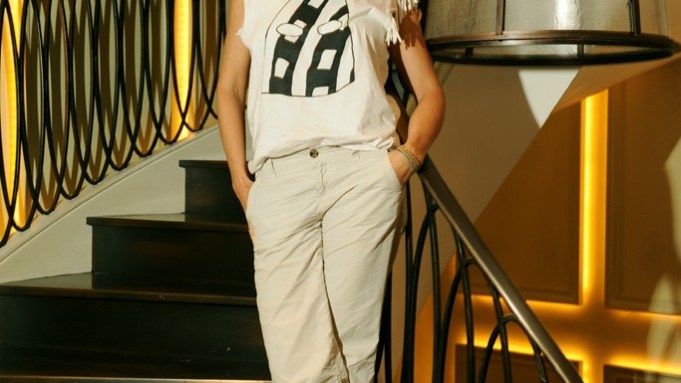 “Isn’t it great?” she says, tugging on the hemline of the boxy alabaster T-shirt, a toothy grin printed across it. “Aren’t these fun?”

She smiles, thumbing the textured teeth jutting out of the printed mouth. The 40-year-old artist, slim and exuding an air of Parisian unkempt cool in her makeup-less face and slouchy ensemble, is holed up in a quiet corner of The National restaurant in Midtown Manhattan. “To me, clothing is a very natural progression of my artwork,” she says, neatly slicing in her hamburger — a divide-and-conquer approach — that’s just arrived to the table. “It’s just another form of expression of me. It’s an extension of my work.”

To wit: Albertini is prepping the launch of a capsule collection, SydneyToWear, next month for FiveStory, the of-the-moment Upper East Side boutique. Until recently, fashion was virtually the only medium with which Albertini had yet to express herself. Her artwork spans from drawing and photography to installation and performance. Albertini went to art school in her native Paris at the Atelier de Sèvre, then studied fresco painting at Studio Art Center International in Florence. “In Italy, I learned how to do frescoes, so it was all about colors and narrative,” she says. “The narrative focus from the Italian Renaissance completely influenced me. My work is based in that same aspect: piecing things together to tell a story.”

Afterward, Albertini came to New York to study fine art at Parsons School of Design. Her latest show, titled “And Also, I Have No Idea,” which opened at the Parrish Museum Road Show in Watermill, N.Y., on Aug. 10, is an interactive exhibition, with attendees encouraged to touch her soft sculptures and sit on the furniture she fashioned herself. “I wanted to go against the whole don’t-touch attitude,” she says. “I wanted to do something very interactive, to create an environment and invite people to be part of that environment.”

Though Albertini works in a range of media, her aesthetic is consistent. Her work is imbued with a sense of whimsy through vivid colors and irreverent, abstracted shapes. They’re full of energy and movement, with even the subjects of her paintings seeming to wriggle off the canvas. Her ready-to-wear collection is no different. The 27-piece lineup is grounded in the sweatshirt. “For me, the sweatshirt is the epitome of American style,” Albertini says, brushing a wisp of blonde hair from her face. “So we wanted to take that idea and turn it into something much more sophisticated and play with color and shape to give it that edginess and sense of subtle cool.”

The collection is made in America, with everything fabricated in a fine terry cloth sourced from North Carolina. The pieces were dyed in California, then shipped to Manhattan’s Garment District for construction. All the hues in the lineup — burnt saffron, deep cerulean, acid citron, etc. — are original dyes concocted by Albertini. “I would mix different oil paints in my studio and then tell the dyers, ‘This is the color I want,’” she says. “I had all these different dollops of mixed colors around my studio.”

The collection retails for $200 to $350 and will be sold exclusively at FiveStory.

“The clothes only started to make sense to me once I saw her art,” FiveStory owner Claire Distenfeld says. “From the second I opened the door, I was like, ‘I get it, it’s a whole pervasive concept,’” she says of first viewing the collection during a visit to Albertini’s East Hampton, N.Y., studio. “Sydney had painted the walls and done all the wallpaper, and she’d made the furniture and her clothing matched the interiors. It was this totally immersive sensory overload in the best possible way.”

Distenfeld is hoping to immerse others in Albertini’s whimsical world; she’s throwing a launch party in September at FiveStory, which will be completely transformed à la Albertini. “We’re basically handing her the keys,” Distenfeld laughs of the Sept. 11 fete, during which FiveStory will be furnished in Albertini’s paintings, drawings, furniture and sculptures. “She’s really going to be taking over the store,” Distenfeld says.

Albertini says she plans on delineating the store fivefold, each representing a different facet of woman: love, gratitude, the beast, the animal and the warrior. “The warrior is like the wild woman, the fighter,” she explains. “I mean, us women, we’re all warriors, am I right?”