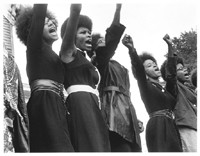 NEW YORK — Members of the Black Panther Party set out to make a political statement, not a fashion one. Still, the edgy style the black nationalist group adopted during the late Sixties was as provocative and revolutionary as their ideas, with the men flaunting a paramilitary look, dressed in leather jackets, sunglasses and berets and the women full-blown Afros, batiks or stark black dresses and knee-high boots.

Press corp photographers churned out incendiary images of the Panthers, documenting the movement’s violence. But a new book of photographs by Ruth-Marion Baruch and Pirkle Jones, “Black Panthers 1968” (Greybull), tells a different story. Baruch and Jones captured the organization’s gentler side in Oakland, Calif., during the fall of 1968, when the pair was granted unparalleled access to the group. In these quiet moments, it’s easy to see just how young, passionate and fiercely fashionable the party members were.

Kathleen Cleaver, who married Black Panther founding member Eldridge Cleaver in 1967, risked her life as the organization’s communications secretary. But she also served as an in-house fashion icon who embodied the group’s Black Is Beautiful ideal, though today she recognizes her trendsetting role somewhat reluctantly. “At the time we weren’t running around thinking ‘we look cool,’” says Cleaver, who penned the book’s forward and now lives in Connecticut, produces the Black Panther Film Festival and teaches law at Emory. “That wasn’t on top of our minds.”

Among the Panthers, however, Cleaver’s sleek look quickly picked up steam. “Eldridge said that I had set another style, and that the way I dressed was how young women wanted to look,” she admits. “They wanted to have Afros and wear black skirts and boots.”

Cleaver’s was also a style that developed out of necessity. “I had one dress, one jacket and one skirt. I’d wear them all the time, but they were all black, so I could get away with that,” she says. “It did create a distinctive look because it was so simple.”

Even dressed simply, the Panthers stood out in a crowd, creating dynamic subjects for the troupe of photographers who followed their every move, including those sent by the newspapers and the FBI. Whether the photographers were friend or foe, however, few of their subjects could resist the desire to look good on film. “People did spend a lot of time fixing their hair,” says Cleaver, laughing. “There were aspirations to have Afros that had a certain shape.”

The Panthers wore the hairstyle out of allegiance to the civil rights workers in Mississippi who went before them, but producing the perfect Afro was no easy task. “People would take all their hair, braid it and tie it up. Then the next morning they’d unbraid it and brush it and comb it out with a pick,” says Cleaver. “They had to get a lot of fluff into it.”

The Panthers’ penchant for outrageous fluff also made it easier to spot the policemen among them gathered at rallies. “They’d try to go undercover and look like you,” says Cleaver. “But the short haircuts were pretty obvious.”

Long before “Cleopatra Jones,” “Shaft” and “Superfly” hit the movie screens and the mainstream, with their characters dressed in homage to the Panthers and with belligerent attitudes to match, Cleaver found herself in plenty of real-life, highly dangerous situations. “The kind of young women who joined this organization would be women who aren’t easily intimidated,” says Cleaver, a diplomat’s daughter who dropped out of Barnard College to join the Student Nonviolent Coordinating Committee in 1966. A year later, she met Eldridge Cleaver, who she divorced in 1985 and who died in 1998. “You took into consideration that people who had done far less would get shot and get killed and get arrested. But you weren’t afraid, it just went with the territory.

“All of a sudden you’re out there by yourself, surrounded by policemen pointing guns at you,” she continues. “Sometimes it was like, ‘OK, well I might as well be calm because what else can you do?’ But I remember those times as an emotional roller coaster. There was a lot of chaos, a lot of confusion, a crisis here, a deadline there, and then you’ve got to go to court. That’s what I remember more than being frightened. Being stressed.”

By the early Seventies, the Panthers’ slick, urban style had turned into a full-blown trend. But the revolutionaries themselves had moved on, and the Cleavers had fled to Algeria after Eldridge Cleaver had run for president and after he was shot by the Oakland police. “I think it was May 1, 1969, that the orders went out for everybody just to wear regular clothes,” she says. The group’s separatist style was turning the Panthers into easy targets, with many members arrested or even shot.

“We didn’t want to encourage the police by standing out,” says Cleaver. “So we just stopped wearing that stuff.”