This is the fourth year that the designer and her husband Jonathan Skow — he designs the Mr Turk men’s line — have attended the festival. 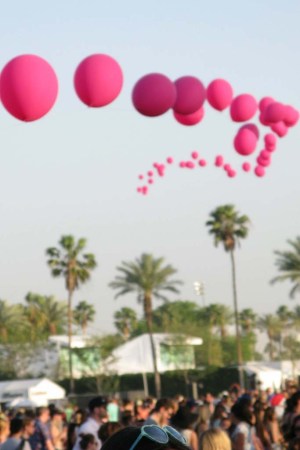 Music isn’t exactly Trina Turk’s forte, so she relies on her good friend and KCRW DJ Anne Litt to guide her through the massive Coachella grounds. “She’s our Sherpa,” Turk said. This is the fourth year that the designer and her husband Jonathan Skow — he designs the Mr Turk men’s line — have attended Coachella. They keep a vacation home in Palm Springs, Calif., so every year the couple ends up hosting a pool party one afternoon. This year’s guests included Litt, actress Jessica Paré and her boyfriend John Kastner from Canadian band Doughboys, and “Mad Men” costume designer Janie Bryant.

Here, Turk’s diary from weekend one. Will she return for weekend two? “Jonathan will go back, but one weekend is enough for me. I drink more than I usually do and stay up way later than usual — it’s not like I’m going to Pilates.”