Burgeoning blues rock power duo Lindsey Troy and Julie Edwards are set to conquer the upcoming festival season, which kicks off with Coachella this month. 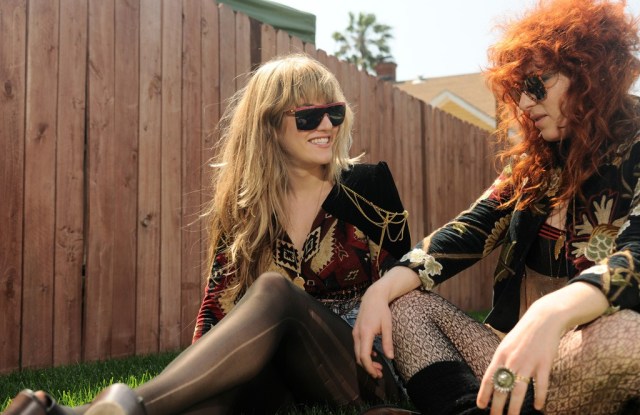 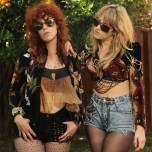 Rock duos steeped in blues, such as Grammy Award winners The White Stripes and The Black Keys, have proven that less can sometimes lead to more in recent years.

Lindsey Troy and Julie Edwards, two girls from L.A. who practice their own brand of raw rock, certainly seem to be on their own reductive path to such heights. Troy met Edwards in late 2010 at a knitting class Edwards was instructing. The two found common ground in their taste of music, having grown up listening to bands like The Doors and Nirvana, and soon started jamming, with Edwards on drums and Troy on guitar and vocals.

“I was so excited to meet Julie, to start a project with another female,” says Troy. They decided to call themselves Deap Vally — a reference to San Fernando Valley, where Edwards grew up, but intentionally misspelled — and started creating music influenced by a few more of their favorites, like blues legend Robert Johnson and Led Zeppelin.

“Before I met Julie, I kind of was taking a hiatus from music,” says Troy. “I was bored of playing by myself. I wanted to do something really bold and courageous.”

Troy, who has been playing music since she was a kid, had been performing as a solo artist after parting ways with her bandmate sister, Anna Troy. “We were kind of a folksy sister duo,” she says of the act The Troys. At the time, Edwards, who is the daughter of “Good Day L.A.” host Steve Edwards, was in the band The Pity Party while working at The Little Knittery in Los Angeles. (Both women demur when asked for their ages, though Troy notes that they are “old enough to rock.”)

Two years later, Deap Vally has become a much talked-about band in the blogosphere and landed several songs on “The Vampire Diaries” series. The pair signed with Cherrytree/Communion/Interscope/Island and have been on the road since July touring England, Europe and Asia with established bands like The Vaccines and Muse and most recently Mumford & Sons, with only a handful of singles released so far. “It’s fun to tour overseas, but you ache for your heartland,” says Edwards. The two are looking forward to traveling across North America this spring with dates that include Coachella Valley Music and Arts Festival, Bonnaroo Music & Arts Festival, Lollapalooza and The Bowery Ballroom in New York City.

“My favorite way to discover new music is at festivals,” says Troy. “Festivals are like rock ’n’ roll summer camp backstage,” adds Edwards. “It’s like the brotherhood and sisterhood of nomadic musicians.”

With their debut EP “Get Deap!” out April 9, followed by a full-length album slated for June, the girls have found themselves juggling tour dates, interviews and photo shoots. They also recently started hosting a radio show through Cherrytree Radio called “Vallymania” featuring rock tracks of their choice. Edwards pulls double duty, still performing with The Pity Party. They seem to be managing it all, conducting this interview on speakerphone while driving to the accompanying photo shoot.

Once they found the location, they were ready to flaunt their version of sex appeal, a combination of Seventies and Eighties elements that feel very now. “We’re really inspired by the fashion of ‘Jem and the Holograms’ with kind of a badass edge,” says Edwards of the much-beloved Eighties cartoon. “We like a wardrobe that reflects our feeling of empowerment and also kind of harkens back to glam rock.” Their touring getups are created by their friends, designers Michelle Rose and Kittinhawk. “I really like collaborating with young, up-and-coming designers so we can all help each other,” says Troy. “It’s fun working with our friends because since we custom-design everything we can let our imaginations run wild,” adds Edwards.

But Troy admits, “I’m really out of touch with fashion because we’re kind of sucked into our own world. I don’t keep up with who’s hot right now.” Edwards, on the other hand points out, “I personally am obsessed with Balmain; all I ever want in life is a really short dress with huge shoulder pads.” They do agree on two things though — always wearing their gold heart-shaped Deap Vally-engraved friendship necklaces and performing barefoot is a must. “You feel more in touch [barefoot]. You can feel the stage vibrating with the music. To us it seems like a very natural thing.”