The actor discussed his latest film, "Everybody Has a Plan." 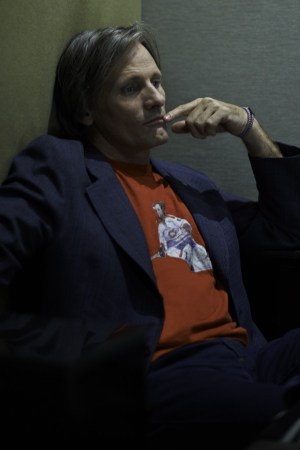 In the last 12 years, Viggo Mortensen has rumbled with Russian mobsters in “Eastern Promises” and vanquished the enemies of Middle Earth in “The Lord of the Rings” franchise. Now Mortensen tackles new challenges in the crime thriller “Everybody Has a Plan,” turning in an electric performance as identical twins and doing the job in fluent Spanish.

“This was the right film at the right time in my life,” Mortensen told WWD at the 2012 Toronto International Film Festival.

“I’m not the first actor to play twins in a movie, and this isn’t my first Spanish-language film,” said Mortensen, who earned a Goya Award nomination for Best Actor in 2007 for the Spanish swashbuckler “Alatriste.” “But these brothers and their subtle, surprising differences excited me. The script, too, just never let up,” said Mortensen. “Just when you think it’s going one way, it goes somewhere else. That hooked me.”

Set in present-day Argentina, the moody film noir from first-time director Ana Piterbarg takes audiences into the lives of Agustin and Pedro Souto, estranged siblings who have taken radically different paths in life. Agustin, a successful pediatrician, lives a comfortable life with his wife in a tony apartment in Buenos Aires. Despite his good fortune, quiet, upstanding Agustin feels trapped. That sentiment only intensifies after his wife announces plans to adopt a baby. Pedro, a violent, chain-smoking beekeeper and crook, lives in virtual seclusion in Argentina’s Tigre Delta — a remote and menacing tangle of islands negotiable only by small boat.

Estranged for more than a decade, Pedro suddenly appears on Agustin’s doorstep and reveals that he is terminally ill. The dying man also makes an unsettling request of his respectable brother.

“These complicated men feel no great love for one another. But they both carry good and evil within themselves. That’s why I needed Viggo to make them real,” Piterbarg said.

“Viggo’s talented and cultured, but he can also be brutal on screen. Without that quality this film would have flopped,” the director explained with Mortensen sitting by her side to translate in a quiet corner of a Toronto hotel.

Raised in Buenos Aires, the soft-spoken Piterbarg spent several years working as an assistant director on films and TV shows after completing her studies at the Experimental Center for Film Direction at the National Institute of Cinema and Audiovisual Arts. In 2008, Piterbarg’s script for “Everybody Has a Plan” won the prestigious Julio Alejandro Screenplay award, a prize given by the Spanish General Society of Authors and Editors, the Buñuel Institute and the Author Foundation of Spain. The win earned Piterbarg $50,000 and some critical acclaim. But it failed to attract the funding needed for the 42-year-old filmmaker to make her movie.

After many rejections, Piterbarg almost gave up hope. Her resolve returned after a chance meeting with Mortensen by in Buenos Aires. En route to pick up her son, Piterbarg spotted Mortensen walking through the building and mustered up the courage to speak to him.

“I knew my husband would kill me if I didn’t ask Viggo to be in this movie,” said Piterbarg.

To her astonishment, Mortensen gave Piterbarg his address and agreed to read her script. Two months later, Mortensen forwarded a note saying he would star in her movie.

Mortensen lived in Argentina between the ages of three and 11 and had fished, on occasion, in the Tigre Delta. The chance to return to these roots sold the 54-year-old star, as did Piterbarg’s strong, character-driven script.

“These characters that Ana has created have secrets, regrets, doubts and fears. Everyone comes face to face with their own failings, lies and desperation. That’s beautiful to watch,” said Mortensen. The star also admired Piterbarg’s quiet, confident directing style, as well as her ideas about the power humans possess to change their lives.

“There’s a saying in Spanish: Without risk there’s no glory,” Mortensen explained. “You can live a safe little life, but if you don’t take a chance once in a while you’ll imprison yourself. That’s the whole point of our movie.”

“Every day, people around the world are asking, What do I want to do with my life? I thought about that constantly when I wrote this script, as well how deceptive good and evil can be,” said Piterbarg. “Every decision we make can change our lives. Sadly, we often don’t realize this until it’s too late.”