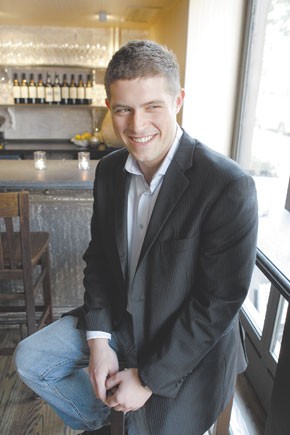 While many new college grads spend their time getting plastered, NYU alum Joe Campanale gets his kicks from actual plaster. “Isn’t it amazing?” Campanale beams, admiring the molded ceilings in his new West Village eatery, dell’anima, which opened last week on Jane Street.

The baby-faced 24-year-old earned his stripes at Babbo as sommelier before recruiting other Mario Batali-trained types for his new venture, including head chef Gabe Thompson, a former sous chef at Del Posto. It comes as little surprise, then, that dell’anima’s cuisine is haute Italian, with dishes like bone marrow custard with gremolata salad and tagliolini nero with calamari ragu. Following Batali practice, Thompson prepares all the pasta by hand, and the accompanying wine list is over 100 bottles long and features Campanale’s personal favorites, Bruno Giacosa and Paolo Bea.

With this project, backed by a number of investors including Gin Lane owner Bobbi Rossi, Campanale says, “We’ve taken a lot we’ve learned from Mario and we’re doing it in our own way. Everything is a little bit more funky, a little bit different.” To that end, dell’anima is hoping for big business during its late afternoon aperitivo hour when small plates and liquors rarely offered on this side of the Atlantic will be served, including a potent house-made limoncello that takes four weeks to brew (see box).

A few blocks closer to Campanale’s NYU stomping grounds, Danny Abrams of The Mermaid Inn has opened Smith’s, an elegant neighborhood spot that is more sophisticated than its Macdougal Street address implies. Indeed, the restaurant has all the trappings Abrams’ businesses have become known for: reliable cuisine at decent prices served in a stylish setting.

“The trend lately has been very rustic, old wood, wainscotting, subway tiles and meat hooks,” says Abrams, who has instead outfitted his place with dark wood floors, Turkish rugs and elegant antique mirrors. To man the kitchen, he and his partner, Cindy Smith (for whom the restaurant is named), hired Pablo Romero, a former sous chef at Bouley. Romero will be turning out new American fare.

“We’ve found someone whose real passion is food,” Smith says, “not writing a cookbook or doing a TV show.”

In fact the whole enterprise is fairly unpretentious. No unmarked entrances or unlisted phone numbers here. As Abrams points out, “We’re immensely reachable.”

Thoroughly wash the lemons.
Boil water and sugar to make syrup. Remove only the yellow part of the lemon rinds and add to alcohol. Add syrup to alcohol/lemon mix and let steep for four weeks. At the end of the four weeks, strain and bottle. Store the finished limoncello in the freezer.