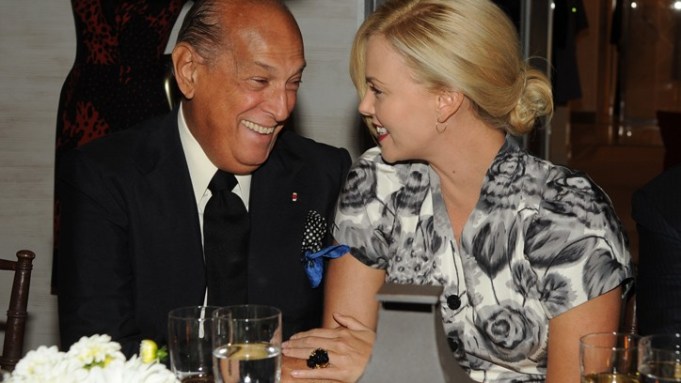 If you’re going to throw a party just days before fashion week — when designers are better off in the studio, and editors are trying to bank well-needed rest — the way to do it is short and sweet. Which is exactly what Charlize Theron and Vogue did Wednesday night for a dinner at Saks Fifth Avenue celebrating the store’s renovated third floor. Guests were seated within 10 minutes of the 8:30 call time, one course was promptly served, and by 9:20 waiters had cleared plates and dropped gift bags with Levain cookies and a custom John Derian paperweight in front of each person. In and out in under an hour. Not an easy feat in the fashion world.

But, as mentioned, there is a lot ahead, namely Fashion’s Night Out. Theron was scheduled to be signing copies of Vogue at Dior, and the actress was prepared to defend herself in the scrum. “I’m ready to scrape some eyeballs out for a [Fashion’s Night Out] shirt,” she said.

Blake Lively, who with boyfriend Penn Badgley arrived late straight from the “Gossip Girl” set, was looking forward to some shopping too. “I love a deal,” she said. “I was almost late for my own birthday party once because I was shopping in the shoe section at Saks.”

Several of the designers in attendance, however, would be working during Fashion’s Night Out, including Vera Wang, Peter Som, Carolina Herrera, Georgina Chapman and James Mischka and Mark Badgley. Oscar de la Renta was anxiously anticipating his big performance number with Barbara Walters at his store. “Barbara wanted me to sing something from one of the musicals. I have never sung that in my life because I only know Latin songs,” he said. “Things like this, you know that you’re going to make a fool of yourself, but you do it anyway.”