Waiting For a Lady at the ACE Awards

Between Lady Gaga, Betsey Johnson and Barbie, it was a battle of the blondes at Monday night’s Accessories Council Excellence Awards.

By Sophia Chabbott and Caroline Tell on November 3, 2009
View Slideshow 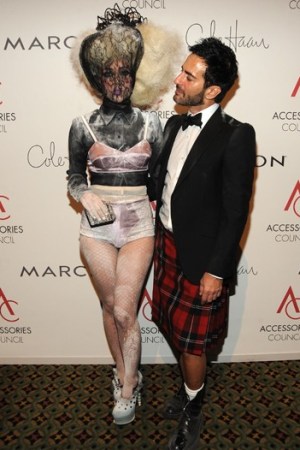 It was a battle of the blondes at Monday night’s Accessories Council Excellence Awards.

While revelers at Cipriani 42nd Street waited patiently for the chance to gawk at Stylemaker Award winner Lady Gaga — who was tardy to the black-tie fete, arriving at the end of the first course — another blonde bombshell captivated the attention of guests such as Agyness Deyn, Alexander Wang, Molly Sims and Diane von Furstenberg: Barbie.

With tables outfitted with Barbie dolls and containers of doll-sized metallic hobos, crocodile-embossed totes and stiletto ankle boots, guests accessorized the 11-inch doll, to much amusement.

Betsey Johnson — who presented Zappos.com with the Retailer of the Year award, and had the brand name emblazoned on the back of her pants — wedged a doll into her chignon, and Marc Jacobs and Lorenzo Martone got funky with Barbie at their table, stripping Barbie down to her birthday suit. When Lady Gaga finally arrived — in a black lace mask and wig that matched the consistency of cotton candy and towered over her ensemble of a blouse under a bra, underwear and several pairs of pantyhose — she joined in the fun with Jacobs and Martone.

“Somehow they [the Barbies] ended up looking like my album cover,” the singer deadpanned.

“Barbie always looks good,” said von Furstenberg, who presented the doll with the Fashion Icon Award and was herself the winner of the Accessory Visionary Award. “She doesn’t age, she doesn’t look tired and she doesn’t need a manicure…and when she has a good day, she contributes to the CFDA.”

Subversive designer Justin Giunta said having only brothers precluded him from a childhood rife with the company of Barbie, Ken, Midge and Skipper. Deyn, who accepted Burberry’s Brand of the Year Award on behalf of creative director Christopher Bailey, who was traveling on business, said, “Barbie lent me her laptop and she’s got it on Skype, so [Bailey] says thank you.”

Calvin Klein made an appearance to present InStyle Magazine’s Hal Rubenstein with the Marylou Luther Award for Fashion Journalism.

“He was instrumental in turning us away from supermodels into the world of Hollywood, he changed magazines forever. Hal is a man born to be in front of a camera,” said Klein.

Other honorees included Bottega Veneta creative director Tomas Maier for Designer of the Year; Nine West’s Fred Allard with the Influencer Award; Gilt Groupe for Retail Innovation, and V Magazine for Magazine of the Year.

The highlight of the night, however, was the surprising 10-minute lethargic monologue by Lady Gaga, who was introduced by Jacobs, who marveled, “She is phenomenal in every sense of the word. Her unique vision is spiritual. It’s inspiring to me and to many.”

Gaga, who came on stage flinging talcum powder from her hands, causing a cloud of white smoke, said, “I felt like a freak for so long in my childhood….When I began to perform, I found out that I had some freaky friends to play with.”

She cited Jacobs, Alexander McQueen, Stephen Gan, David LaChapelle and Hedi Slimane as some of her enduring supporters throughout what the 23-year-old songstress termed her “long” career.

“Hedi Slimane is a muse for the House of Gaga,” she said. “He’s like a palm tree [in that] he shades a girl from New York [from] the Hollywood sun.”

She thanked LaChappelle, and then Mario Testino, for “taking the first photos of me that made me feel like a real woman.”

On her intimate Warholian “factory” of unknown creative collaborators, which she named for the first time during her acceptance speech, she proclaimed the House of Gaga “is not an economy” and would never do a collection.

Gaga, who considers “a condom” the most important fashion accessory of all, was flattered to be receiving the award.

“[Tonight,] I had no gloves, and the outfit needed gloves. So Nicky [Formichetti] decided to paint me white. That’s what happens when you don’t have the right accessory,” she said.