The combination of sea slugs and French pastry is not generally the stuff of intellectual epiphanies, unless you have a dual major in neuroscience and English and pass time in the science lab reading Proust. 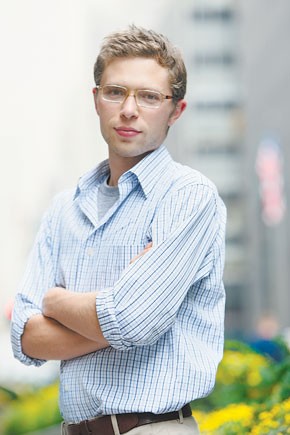 The combination of sea slugs and French pastry is not generally the stuff of intellectual epiphanies, unless you have a dual major in neuroscience and English and pass time in the science lab reading Proust. While waiting for an experiment to finish up (that would be those aforementioned slugs), Jonah Lehrer, a then-undergraduate at Columbia University, read Proust’s famed passage on madeleines and realized that his writing held deep insights into the human brain. The result is Lehrer’s first book, “Proust Was a Neuroscientist,” which was released last week from Houghton Mifflin.

Accessible, though educational, Lehrer’s tone showcases the breadth of his reading. “Proust” explains how a slew of modernist artists, including Walt Whitman, George Eliot and Virginia Woolf, anticipated many scientific discoveries on the plasticity of the brain.

“I was one of those people who saw connections everywhere that made sense to no one else. But they made perfect sense to me,” explains Lehrer, 26. “My friends used to mock me tremendously. I’d walk into the Met and go ‘Paul Cézanne was a neuroscientist!'” After winning a Rhodes Scholarship his senior year, the Los Angeles native spent two years at Oxford University studying 20th-century literature and theology and writing his book.

A chapter on Gertrude Stein focuses on language, while a look at Auguste Escoffier illustrates the complex art of taste, a phenomenon of which Lehrer has intimate knowledge, having worked as a line and prep cook at Manhattan’s Le Bernardin and Le Cirque during college summers. It wasn’t too far a jump from his scientific life.

“In the lab it’s the same basic idea: just instead of filet mignons, it’s chopping enzymes,” quips Lehrer. “You know, it’s a little of this, then this, then that, voila! Although [with] my science experiments it was rarely ‘voila!’ It was more like ‘S–t!'”

Lehrer soon realized he was a “terrible scientist.” He now lives in New Hampshire with his girlfriend and is an editor at Seed magazine. His next book will take on the neuroscience behind decision-making.

And while it may not contain highfalutin literary passages, Lehrer hopes his melding of the arts and sciences will become a more common discipline.

“We have such a strict definition of truth right now: in terms of an equation or appearing on bar graphs or something people can replicate in the lab. It’s a very sterile version of the truth. So I think it’s really tough for us to even read a novel: how could this actually help science?” says Lehrer of the current academic divide. “Obviously Virginia Woolf isn’t going to help you solve your experiment. Proust isn’t going to invent Prozac. But they can teach scientists how to ask better questions about the mind, about human experience.”