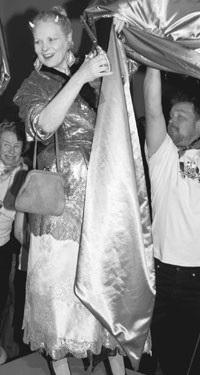 LONDON — They came in pirate hats with feathers as tall as sunflower stalks, curvy dresses with bustles and spiky punk hairdos. The party to kick off the Vivienne Westwood exhibition at the Victoria and Albert Museum was a champagne-fueled homage to the mother of punk fashion, who once said “You have a much better life if you wear impressive clothes.”

“She is a British icon and she has surpassed fashion,” said Burberry’s Christopher Bailey, who joined Rose Marie Bravo, Kate Moss, Jefferson Hack, Mary McCartney, Tracey Emin, Jake and Dinos Chapman, Erin O’Connor, Bay Garnett, Karen Elson, Sadie Frost, Manolo Blahnik and Jerry Hall to fete the designer. “Long ago, she formed a very strong opinion about fashion, and she’s had the integrity to stand by it.”

Moss said she’s been collecting Westwood pieces for years. “I’ve loved her since I was 14. I used to make special trips to London to buy her clothes.”

Most agreed Westwood is a designer of many talents. “She puts curves where you haven’t got them,” said Leah Wood, a sentiment echoed by Sam Taylor-Wood: “The best thing about Westwood’s clothes? Breasts and bums.”

Earlier in the day, Westwood, who was sporting two small silver devil horns in her carrot-colored hair, talked about the show — the largest the V&A has ever dedicated to a British designer. It features 150 designs from the museum and from Westwood’s personal archive and traces three decades of her work, from the days of black leather and peekaboo zippers to the punk buckles and snaps, to her watershed Pirate collection with its famous baggy breeches.

“I’ve fallen in love with these pieces all over again,” said Westwood, wearing a dusty rose silk dress decorated with little, sparkly bug pins. “I have a new appreciation for all the skill and technique. This is an oeuvre.”

Westwood said her approach to constructing clothes is more than meets the eye. “There’s a lot of trickery that goes on in my studio. I try to develop ready-to-wear clothes that look like couture but that are affordable. Fashion should be worn and used. It is an applied art, not a crusade.”

Regardless of the individual theme, the thread that weaves its way through all of her collections is that the clothes are always “heroic.” “They are larger than life, they help strike a figure, they have a sense of adventure about them. These clothes are strong and extreme. They don’t hide you — they help you.”

The designer called her Pirate collection the crucible of her style and technique. “With that collection, I realized what I could do with ethnic and historical cutting.” Indeed, the exhibition explains how Westwood hit the history books and learned special sewing techniques to create the loose-cut trousers of 18th-century men’s clothing.

While she may be a member of fashion royalty, Westwood is no princess — or so she says. “I brought my mother here to see the show the other day and she said: ‘Vivienne, I don’t know where you dreamed all of this up.’ I told her it wasn’t dreaming, it was just hard work.”

As for the little silver horns, “They’re pagan. The Renaissance rediscovered paganism, and the 16th century was English culture for me: Queen Elizabeth I, Shakespeare and Pope.” And knowing a fashion moment when she sees one, for her big night, Westwood made sure to swap the silver horns for diamond ones, courtesy of De Beers.