On a recent fall evening, a crowd of waifish men and women in drainpipe jeans spilled out of a tiny street-level space and took over the corner of Manhattan's Lafayette and Kenmare Streets, beers in hand. 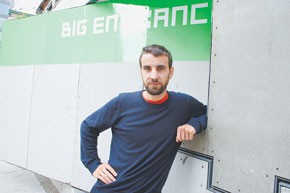 On a recent fall evening, a crowd of waifish men and women in drainpipe jeans spilled out of a tiny street-level space and took over the corner of Manhattan’s Lafayette and Kenmare Streets, beers in hand.

Though to passersby it must have seemed like the opening of the latest hipster bar, it was actually the opening of the “CPH Experiments” exhibit at the Storefront for Art and Architecture. The gallery was filled with Lego models of imaginary buildings made by the Copenhagan-based experimental architecture collective BIG. Its photogenic leader, Bjarke Ingels, greeted admirers while a tape of his Danish TV appearance played overhead.

Meanwhile, Storefront’s new director, Joseph Grima, observed the crowd from the sidewalk, and he must have been pleased with what he saw. Since he took over in January, following a three-year stint at Italian publication Domus, Grima has sought to reenergize the 25-year-old institution’s mission of examining architecture’s role in society.

“I think there is a lot of boredom with the didactic approach toward communicating art and architecture,” he says. “I’ve been really trying to see Storefront not simply as a gallery, but also as an event space.”

Events, Grima has decided, are a good way “to reach out to audiences who wouldn’t normally pay attention to exhibits.”

For example, Storefront recently hosted “Dance Faster,” an open-to-the-public performance in nearby Petrosino Park by artist Daniel Perlin — aka DJ N-Ron. Perlin broadcast music over wireless headphones and the more than 70 participants danced along silently. It was such a hit that Grima is thinking about bringing the show to different locations throughout the city.

Considering the astonishingly small size of the museum (it measures a mere 100 feet long and tapers from 20 feet to 3 feet in width), it makes sense he’s looking outside the gallery walls.

Besides planning so-called “interventions” like “Dance Fever,” he also has targeted the virtual world through live blogging events. And this fall, Storefront commissioned Korean architect Minsuk Cho to erect a giant dome of hula hoops over Petrosino Park as part of a monthlong 25th anniversary celebration and event series, called “Performance Z-A.”

This story first appeared in the November 1, 2007 issue of WWD. Subscribe Today.

Now the exterior facade of the museum is acting as a public movie screen as part of Performa 07, the performance art biennial. Swedish choreographer and artist Mårten Spångberg and architect Tor Lindstrand are currently reshooting the Gene Kelly film “On the Town” in locations throughout New York, and projecting new scenes daily until Nov. 20 on Kenmare Street.

“We took it to Storefront and they loved it,” says Performa founder RoseLee Goldberg. “It fit their whole mission. It’s a new way to think about the urban fabric of New York.”

And as a result of such happenings, downtown can’t help but sit up and take notice of the institution once again.

Serge Becker, who owns La Esquina across the street and the Box a few blocks over, is a fan and has offered both his support with the local community board and the use of his other space, 205.

“Storefront has become a less introverted institution, both physically and philosophically under Joseph,” Becker says. “The shows are more accessible to the general public, and it’s becoming more of a hub for people. There’s a sense of excitement that has been missing.”

“It could be considered a cynical ploy to get attention,” Grima admits of his efforts, “but I think it’s also a way of reaching out to a whole different group of people I knew would be interested in what we are doing.”