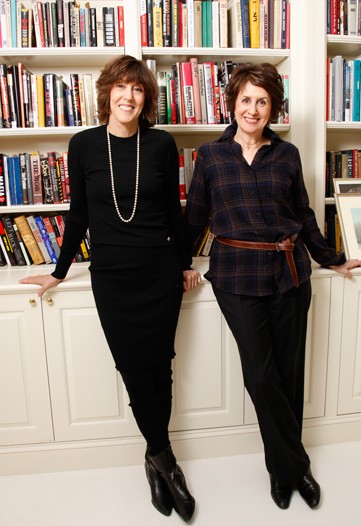 Nora and Delia Ephron swear up and down they’re not fashionable.

Delia: “I make thousands of fashion mistakes. Every single thing I bought last year was a mistake.”

And yet. On an early fall morning, the sisters and sometime-writing partners sit down in Nora’s office on the Upper East Side, looking perfectly pulled together and wearing exactly the kinds of labels (Chanel, Prada, The Row) that very fashionable women wear. This, it seems, is not unusual.

“Every time I see them they look so chic,” says actress and comedienne Samantha Bee. “When I stand beside them I feel like a hillbilly.”

Whether or not they’ll admit to being into fashion, the Ephrons are talking a lot about clothes these days — their own and other people’s. Their new play, “Love, Loss and What I Wore,” based on Ilene Beckerman’s best-selling book of the same name and starring a rotating cast including Bee, Rosie O’Donnell, Rita Wilson and Jane Lynch, opens at the Westside Theater on Oct. 1. As the title suggests, the vignettes the Ephrons have written address love, loss and what women wore, but it’s not all Manolos and LBDs. The play also discusses the big, capital-L Life stuff, such as death, illness and even rape. (A portion of ticket sales benefit Dress for Success.)

“When you ask people about their clothes, what they do is tell you about their lives,” Delia says. “Someone will say, ‘My husband was wearing a Grateful Dead T-shirt when he told me he didn’t want to be married anymore.’ For some reason, that’s what they remember.”

Like the book, the play begins with Beckerman’s mother and the Brownie uniforms, taffeta party dresses and Easter Sunday outfits she sewed for her daughter. “My mother made this for me,” Beckerman writes about a black ballet class ensemble. “I liked it very much, but what I really wanted was a store bought outfit.”

It’s a logical jumping off point, Nora says. “If you just say to anyone, point blank, to talk about their clothes, they start with their mothers. It’s so loaded with mother stuff.”

The Ephrons’ own mother, Phoebe, a screenwriter who lived in Beverly Hills, wore a uniform of skirt suits that she bought at Matthews and Amelia Gray. Nevertheless, “she didn’t think about clothes in any real way,” Nora says, “and in sort of a good way — except if you were a teenager and she didn’t understand why it mattered so much to you that you have a reversible Pendleton pleated skirt.”

And so growing up, questions such as “does this look OK?” were left to Nora and Delia’s younger sisters, Amy and Hallie. The four were too far apart in age to share (or fight over) clothes, but Delia did end up with Nora’s hand-me-down prom dress: a bubble-gum pink, strapless, “sort of lacy” confection with a matching chiffon scarf. “I feel bad about that,” Nora says, “but then I remembered the dress, and it was really cute.” Neither woman remembers her date.

Later, Nora and Delia experienced their fair share of sartorial triumphs and tragedies. The dresses they chose for their first weddings were fabulous, they say, even if the marriages weren’t.

Nora: “My first wedding dress — oh, it was the cutest dress ever in history. It was so darling. It was a little white lace dress with a collar, right at the height of the whole minidress period. It came to there [she draws a line high above her knees], and it had little scallops around the bottom, and it was really slim. I bought it in the dress department of Saks for $110. It’s tragic I don’t have it, not that I would ever wear it. But it was so cute.”

Delia: “My first wedding dress was fantastic. It was antique, from 1918. It had this tiny waist, it was gauzy and it had embroidered, little black dots on top and then it just went to white. Just was gorgeous, down to the ground with a little ruffle and a little more black down there. [But] my friend cut off the bottom up to here [also points to above her knees], and moved the ruffle up and it became the weirdest-looking dress you’ve ever seen.”

For her second wedding, to screenwriter Jerome Kass, to whom she’s still married, Delia wore a Mexican-style full skirt with an off-the-shoulder top and a gardenia in her hair. “God knows I’ve never worn anything Mexican before or since,” she says. “It’s one of those things, you’re buying something for your wedding…”

“You lose your mind,” Nora says.

Case in point: the Holly Harp gown that was “spotted like a Dalmatian” that Nora wore to wed her current husband, writer Nick Pileggi. “It was just a disaster. You had to be, like, Christie Brinkley at 30 to wear it. That, plus my permanent — it was a miracle he married me, that’s all I can say.”

Since then, as has been said, the sisters have refined their sense of style. So much so that Beckerman insists: “The only thing bad I can say about them is that they’re very thin and very well-groomed.”

The sisters have learned to rely on a few favorite brands to help them avoid any missteps. Delia, 65, likes Hervé Léger — “You’re always wrapped up like a mummy, but you look pretty cool,” she says — and buys her basics from The Row. “Do you think [designers Mary-Kate and Ashley Olsen] knew they were doing age-appropriate clothes?”

Nora, 68, sticks mostly to Giorgio Armani and Jil Sander and mostly to black. “Black pants and a black pullover, a black long-sleeve thing and then something over it,” she says. “It’s a complete cop-out.”

Whatever it is, it’s working.

“They’ve totally got it going on,” says Bee. “Nora had a jacket on [at rehearsal] yesterday that I was drooling over, and Delia was wearing these little boots. My goodness, you want to snatch their clothes and run.”