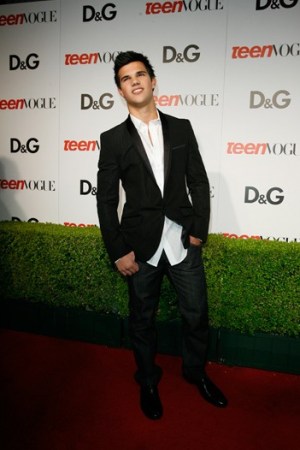 It was a good thing Teen Vogue chose a Friday to celebrate its seventh Young Hollywood issue, since many of the underage attendees would have had to miss it were it on a school night. “I had to do my homework before I came here,” said “Lost” star Sterling Beaumon, who joined the mag’s cover boy, “Twilight” hunk Taylor Lautner, and a host of other tween idols like Selena Gomez, Jesse McCartney, Lil Romeo (now actually a student at the University of Southern California), Kelly Osbourne and her fiance Luke Worrall at the bash. Also sampling the D&G scents from its new Fragrance Anthology and taking in a fashion show of the brand’s fall-winter collection were “Twilight” newbie Noot Seear, Autumn Whitaker, Francesca Eastwood, Miranda Cosgrove, Lily Collins and Tallulah Willis. The evening was capped off by a performance by London band The Noisettes, who maybe aren’t the best babysitters. “Mommy and Daddy aren’t here,” declared lead singer Shingai Shoniwa, “So let’s have some fun.”