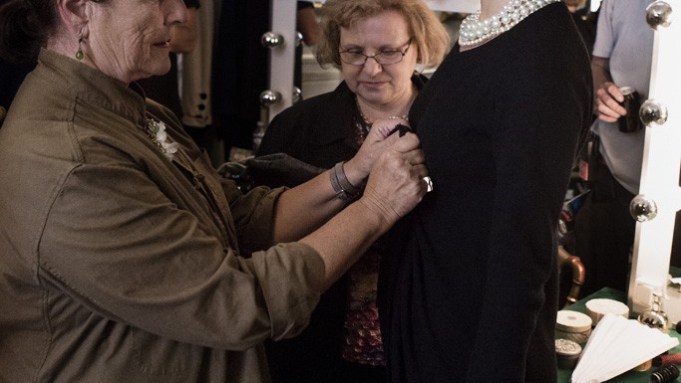 Buzz has built around “Yves Saint Laurent,” directed by Jalil Lespert, due largely to the performances of Pierre Niney, who plays Saint Laurent, and Guillaume Gallienne, who takes on the role of Bergé. Both are members of the prestigious Comédie-Française theater and appear to nail their parts.

“I am blown away by Pierre Niney’s performance,” Bergé told WWD ahead of the film’s release. “It really disconcerted me, it even upset me, because it’s very difficult. At times, I thought it was Yves Saint Laurent himself. That’s huge.”

The businessman was equally complimentary toward Gallienne. “I think he’s an extraordinary actor,” Bergé said. “It’s a lot harder [for me to judge his performance objectively], but I will say that I am moved to be featured in a biopic during my lifetime.”

To fine-tune Saint Laurent’s voice and mannerisms, the 24-year-old Niney — who is being hailed as one of the brightest Gallic talents of the moment — obsessively watched old television interviews of the designer, who died in 2008.

He took lessons in fashion design, sewing and drawing, pored through the archives of the Fondation Pierre Bergé — Yves Saint Laurent, and spent hours with Audrey Secnazi, an illustrator who worked with Saint Laurent for more than a decade.

From the beginning, Bergé has backed Lespert’s project, which ended up winning the race to cinema screens against the rival “Saint Laurent,” directed by Bertrand Bonello and featuring Gaspard Ulliel in the title role. The latter feature is now expected to premiere during the Cannes Film Festival in May.

Bergé’s support was not only moral but practical: His foundation loaned the production 77 vintage outfits from its archives and allowed Lespert to film certain scenes at its headquarters on Avenue Marceau in Paris, where Saint Laurent’s design studio has been left intact and can be visited by special appointment.

Among the outfits seen in the movie are creations from Saint Laurent’s first collection under his own name, shown in 1962; Mondrian dresses from 1965, and pieces from the Collection 40, which sparked a scandal in 1971 with World War II-inspired items like a broad-shouldered green fox fur coat.

Bergé said it was crucial to him that the clothes and drawings featured in the film were the real deal.

“We never loan out clothes, so each one came with a handler. Someone from the foundation was behind each outfit and the models were not allowed to sit down. It was very complicated, but we did it,” Bergé said. “I lent him the clothes on several precise conditions: that we got to pick the models, hair and makeup.”

Indeed, Bergé got so caught up in filming that he reprised his former duties, sending out models on the runway for a reconstitution of Saint Laurent’s famous Opéra Ballets Russes collection of 1976, which was filmed at the show’s original venue, the Westin hotel (formerly known as the InterContinental.)

“It’s important to maintain the image of Yves Saint Laurent. That’s why I store 8,000 outfits here in this foundation. It’s the reason I organize exhibitions, in Paris of course, but also worldwide,” he explained.

On the flip side, Bergé has declined to cooperate with Bonello and warned the director that he will sue if the rival production features any unauthorized reproductions of Saint Laurent dresses or sketches.

“I’m saying they are not allowed to show copies,” Bergé said.

If Bergé is fiercely protective of Saint Laurent’s creations, he has nonetheless stopped short of glorifying his former partner’s private life.

He praised Lespert’s film — based largely on a Laurence Benaïm biography of Saint Laurent and Bergé’s reminiscences in his book “Letters to Yves” — for showing the designer’s demons, including his descent into alcohol and drug addiction and the couple’s frequent fights.

“The movie doesn’t take sides. It reflects a truth: All men have a dark side and a light side. My life with Yves Saint Laurent was no fairy tale,” he said. “I wouldn’t change a thing. You know, when it’s not your project and you trust someone — Jalil, in this instance — you have to accept things. You must not focus on details you dislike. Of course there are details I don’t like, but that is of no importance whatsoever. You have to take the movie as it is — as a whole.”