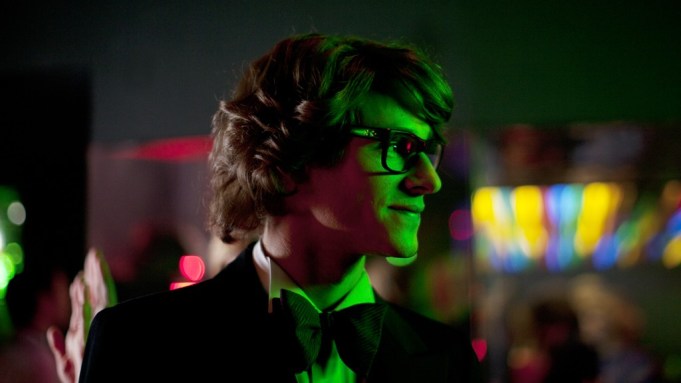 This year, it’s all about Yves.

Director Bertrand Bonello says he is not interested in an exhaustive retelling of the designer’s life story.

“I think that’s kind of off-putting, because all you need to do is consult Wikipedia and it’s all there,” the avant-garde filmmaker says. Instead, the movie jumps back and forth in time, focusing on the period between 1967 and 1976, when the legendary couturier was at the height of his power.

“We weren’t interested in showing how Yves Saint Laurent became a genius. We wanted to show what it cost him every day to be who he was, and that’s why at the beginning of the film, he is already a star,” the director explains. (Lespert’s film has a premiere Wednesday in New York at the French Institute Alliance Française.)

Whereas Lespert benefited from the full cooperation of Saint Laurent’s partner Pierre Bergé, who gave him access to his archives, Bonello directed the unauthorized version, giving him the freedom to put his own spin on events — including some scenes that straddle the real and the imaginary.

“There is no scene that comes out of nowhere. It can stem from historical fact, an event, a phrase, an image — and then, based on each of those things, I try to suggest something that is both true and made up,” he says.

Much of the story centers on the affair between Saint Laurent, played by Gaspard Ulliel, and decadent dandy Jacques de Bascher (Louis Garrel), who leads him down the path of drugs and sexual debauchery. While some of the material is shocking, Bonello largely eschews explicit sex scenes, though his previous films, “The Pornographer” and “House of Tolerance,” featured copious nudity.

“I thought that was beside the point,” he says.

Instead, he lavishes as much attention on the scenes set in Saint Laurent’s studio, where seamstresses labor to make his designs come to life, as on the hedonistic nightclubs where the era’s sexual revolution unfolded.

“I always defended the fact that it would be a film full of contrasts,” Bonello says. “It’s almost when he is at his lowest point that he produces what is said to be his most beautiful collection.”

Lacking access to the archives of the Fondation Pierre Bergé – Yves Saint Laurent, the film’s costume designer, Anaïs Romand, set up a workshop to re-create looks ranging from Le Smoking to the Saharienne. Staffed with real seamstresses, it doubled as Saint Laurent’s workplace in the film.

Bonello shrugs off Bergé’s threats to sue the producers of the film for featuring unauthorized reproductions of Saint Laurent dresses and sketches.

“Despite what he says, we absolutely have the right to reproduce the dresses. Regarding the drawings, opinions differ on what you can and can’t show. But I don’t think that Mr. Bergé has malicious intentions against the film,” he says.

The legal skirmishes that marred the production phase of the film proved more of a headache for Ulliel.

“In a way, it gave me more time to prepare. What bothered me more was the idea of two films, and knowing there was another Saint Laurent played by Pierre Niney, who is a great actor. That put extra pressure on me, but I quickly decided I needed to forget about that and concentrate on our film, otherwise I would be paralyzed,” the young French actor recalls.

Best remembered for his role as a young Hannibal Lecter in “Hannibal Rising,” Ulliel has a lot riding on this movie. By his own admission, he has not worked much since becoming the face of Chanel’s men’s scent Blue in 2010.

“Because I had the financial comfort of the Chanel campaign, I told myself — and in hindsight, it was not the wisest thing — that I could take the time to pick the right projects,” he explains. “I put myself in a holding pattern and today, I realize this no longer suits me. I need to work in order to exist.”

Playing Saint Laurent was the role of a lifetime, and Ulliel devoured every available source material.

“I have rarely been offered such an emblematic, complex and demanding role,” he says. “I think I really managed to do my job once I realized that I should not imitate him, because it cancels out all emotion, and that it was by making him my own and somehow reinventing him that I would manage to convey emotion.”

“What is beautiful in the way Bertrand tackles the biopic genre is that at no point is there any attempt to demystify Saint Laurent or to try to explain or justify or take apart his enigma. In the end, the mystery remains completely intact,” says Ulliel.