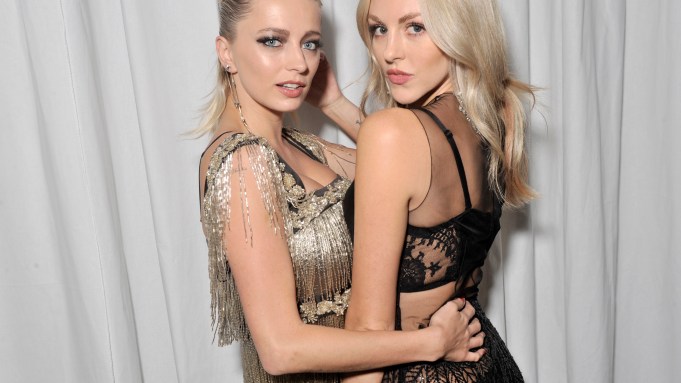 MILAN — Sharon Stone may not have been present, but that didn’t stop the fashion crowd from setting a new record at the amfAR gala and auction in Milan on Saturday night. The event raised nearly $2 million, with a portion of proceeds going to victims of the earthquake in central Italy last month.

There were plenty of models on hand to raise the temperature in the room, with lots including tickets to the 2017 Golden Globe awards and invitations to the next Victoria’s Secret show. Karolina Kurkova, Lottie Moss, Adriana Lima, Sara Sampaio and Dita Von Teese were among the night’s presenters.

Von Teese recorded a cover version of Culture Club’s “Do You Really Want to Hurt Me” for amfAR’s compilation album, “The Time Is Now,” set for release on Oct. 7.

“I just think it’s a great cause and they’re really making strides to actually find a cure,” said the burlesque star, wearing a sequined black Elisabetta Franchi dress and Adele Mildred sheer hat. She is also working on a new show, “The Art of the Teese,” that will begin touring the United States in February.

Heather Graham, wearing Tony Ward, was busy finding distributors for “Half Magic,” her directorial debut. “I wrote it and directed it and acted in it,” she said. “It’s a sex comedy from a woman’s point of view. I feel like it’s a different point of view that you’ve never seen in a movie before.”

Guests had a field day posing with the giant blue rabbit near the entrance of La Permanente museum, where the gala was held. AmfAR chairman Kenneth Cole was briefly at a loss to explain its presence. “You know, I don’t know the whole story. I think he came in the back door when I wasn’t looking,” he demurred.

The recyclable plastic statue, part of an installation by Cracking Art, later sold for 45,000 euros, or $50,500 at current exchange. Cole did have something to say about the evening’s guest of honor, Fiat heir Lapo Elkann, who received the organization’s Award of Courage.

“He’s been wonderfully generous of his resources and energy for so many years, so this is our way of saying thank you to him in his backyard with all his friends,” he offered.

True to form, Elkann paid 35,000 euros, or $39,275, for a set of photographs taken at Studio 54, and auctioned off an opportunity to dine at the new restaurant he will open with Italian celebrity chef Carlo Cracco in Milan next year. “I’ve been very fortunate in life, and for me to be generous, it’s normal. I have to. If I wouldn’t, it would be a shame,” he said.

“I know many of you in the room because I’m Italian and there’s a lot of my, I would say, brothers in the room — a lot who buy beautiful cars, a lot who have great planes, a lot who love to go to fashion shows, buy suits, buy clothes for their wives, so instead of being generous on vanity, be generous on things that really have a purpose and have a meaning, please,” he exhorted the crowd.

One guest appeared to take his words to heart. Millionaire David Mimran delighted his tablemates by repeatedly snagging lots, including the Victoria’s Secret experience, which included a backstage tour and entrance to the show’s after party. “C’mon guys, I’ll let you put lotion on my knee,” Lima teased during bidding.

Kurkova said what goes around comes around. “I see when I give, it always makes you feel so good, and when you give, always so much more comes back. It’s just how it works, the universe,” she reasoned.