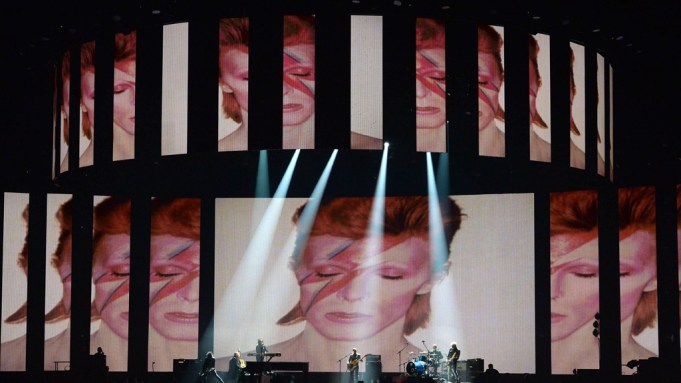 TRUE BRIT: Rumors had circulated prior to the Brit Awards in London that Kate Moss would be appearing in a David Bowie tribute during the ceremony, while there were other whispers that a supergroup comprising Adele, Coldplay, Bono, Noel Gallagher and Damon Albarn would perform in his honor at the annual awards ceremony. What actually came to pass on Wednesday night was a sober acknowledgement of Bowie’s talent and contribution to the music industry, a sharp contrast to Lady Gaga’s 10-song performance at last week’s Grammy Awards.

Annie Lennox introduced the tribute dressed in a black tuxedo in a nod to Bowie’s androgynous style. “He continues to live on through his music. David Bowie is deeply embedded in the heart of British culture, as a fixture within our collective psyche. Like the miraculous moon landing that inspired the song, he drew us away from our suburban lives, expanding our horizons, turning everything on its head into gloriously subversive Technicolor,” she said.

Gary Oldman spoke of Bowie’s sense of humor. “Even in dire circumstances, when he wrote to tell me the bad news that he had cancer, he added: ‘The good news is, I’ve got my cheekbones back.’ He was the sweetest soul ever, with the best cheekbones — until it was done,” he said.

The musical tribute itself was performed by a band that had worked with Bowie for many years. They played an instrumental medley of his greatest hits before Lorde, whom Oldman said Bowie had described as “the future of music,” sang a stirring rendition of “Life on Mars” to a standing ovation, which left many in the audience dabbing tears from their eyes.

Fashion-wise, the Brits featured as many fashion misses as hits: Pop group Little Mix were dressed in a hodgepodge of cream and gold fabric cuttings, while Kylie Minogue raised eyebrows with a wide-brimmed black hat and a black Dolce & Gabbana dress. Later in the night, she changed her outfit, slipping into a pastel strapless dress by Ralph & Russo to present the British Male Solo Artist award to James Bay.

Among the outfit winners was Jourdan Dunn in shimmering gold Julien Macdonald, who presented the award for Best International Group which was won by Australian rock band Tame Impala. Alexa Chung wore a black velvet Preen by Thornton Bregazzi dress, while Karlie Kloss was in white lace by Alexander McQueen.

Rihanna arrived in a lilac Armani Privé gown before taking to the stage to belt out her first live performance of “Work,” which topped Billboard’s Hot 100 chart this week. The song marks her 14th No. 1 in the U.S., overtaking Michael Jackson to become the third artist with the most No. 1 songs on the chart, following The Beatles and Mariah Carey.

Adele, who won four awards, donned a burgundy Giambattista Valli dress. She slipped into a sequined Valentino number to close the show with a performance of “When We Were Young.”

The Bowie tributes continued at the Warner Music after party, where waiters had glittery lightning bolts painted on their faces. In the VIP room, hosted by DSquared’s Dean and Dan Caten, Fiona Leahy was dressed in a sparkly gold jumpsuit by Temperley London. “Of course it’s a tribute to Bowie,” she said. “It’s my spaceman outfit.”

Abbey Clancy was wearing a vintage gold chainmail dress, and was accompanied by footballer husband Peter Crouch. “I’ve just been filming with David Walliams for Sports Relief,” he told WWD. “I was dressed up with ridiculous hair and a silly costume to play the boyfriend of David’s cross-dressing ‘lady’ character. I felt very uncomfortable, but it was hilarious and for a good cause.”