The 23rd edition of amfAR’s annual Cinema Against AIDS gala was an epic affair that kept revelers on the French Riviera partying into the wee hours. 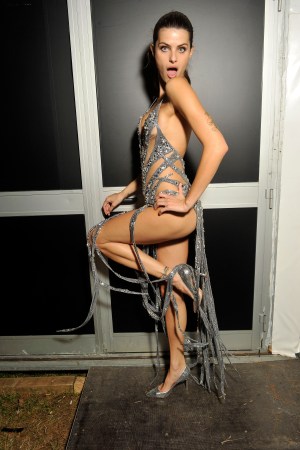 CAP D’ANTIBES, France — A-list stars, a disco-themed fashion show and a seemingly endless auction: the 23rd edition of amfAR’s annual Cinema Against AIDS gala was an epic affair that kept revelers on the French Riviera partying into the wee hours.

Katy Perry, Sister Sledge and Village People provided the entertainment, while 2016 Cannes Film Festival jury members Kirsten Dunst, Vanessa Paradis, and Mads Mikkelsen and amfAR chairman Kenneth Cole sat in the crowd, along with a bevy of millionaires and models.

Fanning arrived with director Nicolas Winding Refn just as reports were filtering in from the press screening of his movie “The Neon Demon,” in which the 18-year-old has the lead role. The horror film, set in the fashion industry, sharply divided critics at Cannes 2016 with its scenes of flesh-eating and lesbian necrophilia.

“It’s a movie about this fashion world and kind of beauty obsession,” said Fanning, wearing a diaphanous Valentino gown. “It’s a movie for girls — I mean it’s all women, you know — and it’s very exciting, and I just love it so much. It’s so different. I think it’s very wacky and will start lots of discussions.”

Edgerton was basking in the rapturous reception for “Loving,” one of 21 films competing for the coveted Palme d’Or award. Based on the true story of the couple that paved the way for interracial marriage in the United States in the Sixties, the movie directed by Jeff Nichols is already garnering Oscars buzz.

“I knew Jeff had made a special film, but I just hoped that the audience would feel that way too and it was the way it was — it was beautiful,” said Edgerton, noting that his character is a man of few words.

“It’s weird — I’ve come out of a couple of films where I talk maybe too much, so it’s nice to talk very little and, you know, a film is about expression and about capturing thoughts, and so as long as that’s there, words don’t mean as much, sometimes,” the Australian actor mused.

Dunst was relishing the role of juror. “I love the people that I’ve been able to meet. I feel like I have relationships that I’ll have for the rest of my life — it’s been really wonderful,” she enthused.

She and Paradis share a fondness for smoking. The French actress hid her roll-up cigarette behind her back to pose for photographs, but quickly thought better of it, as she laughingly mimed her vaporous Chanel gown going up in a puff of smoke.

The luxury brand also dressed Juliette Binoche, who has joined forces with talents including Robin Wright and Freida Pinto to launch We Do It Together, a nonprofit production company dedicated to financing and producing female-driven films.

“I get the feeling that consciences are changing and that there is really a yearning for women to be more involved in the creative process and be recognized,” the French actress said.

Inside the venue, business took a backseat to entertainment, as Spacey — replacing Sharon Stone as emcee — launched into spot-on impersonations of the likes of Johnny Carson and Bill Clinton. With a series of zingy one-liners, he roasted everyone from Donald Trump to producer Harvey Weinstein.

“I don’t think Donald Trump would like it here at the Cannes Film Festival. Foreign films contain the two things Donald Trump hates the most — foreigners and reading,” Spacey said in Carson mode. “No, I’m kidding. Donald Trump would probably love it here on the Riviera, because there’s so many casinos to bankrupt.”

Among the auction lots was a day with the “House of Cards” star in Washington D.C., which sold for 500,000 euros, or $560,000 at current exchange. Guests also bid on a week’s stay at DiCaprio’s home in Palm Springs.

“Now that’s very rare — that’s something only a few hundred Victoria’s Secret models have been able to do,” Spacey joked. “And apparently Orlando Bloom is going to be bidding on that one. No, no, no, it’s fine, it’s fine. He and Katy have an understanding — they don’t mind what goes on near the desert.”

That jibe was a reference to tabloid reports that the British actor cheated on his girlfriend with Selena Gomez in Las Vegas. Bloom and Perry have been packing on the PDA since arriving in Cannes.

Bidding went stratospheric on several lots, including the collection of 32 designer outfits modeled by the likes of Karlie Kloss, Jourdan Dunn, Alessandra Ambrosio and Doutzen Kroes, which sold for 1.4 million euros, or $1.57 million.

Brody, currently on screens in “Manhattan Night,” said he has put his acting career on hold to focus on painting. Going by the artist name Brody, he donated a painting titled “Jumbo Dropfish.”

“The painting tonight is a fish that represents the brightness of fish that live at the darkest depths of this Earth,” the Oscar winner explained. “If you can relate to this and the beauty of the human spirit that must shine bright during the dark times that we are living through today, please bid on this fish.”

It went for 450,000 euros, or $505,000, beating lots by leading artists including Martin Kippenberger, Richard Orlinski and John Armleder. The event raised more than $25 million in total.