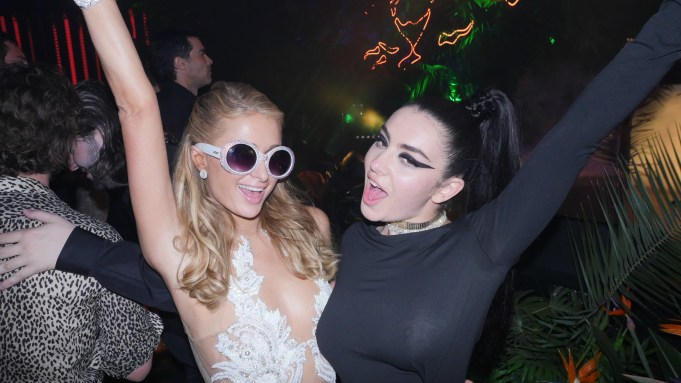 An army of models including Kate Moss, Kendall Jenner, Adriana Lima, Petra Nemcova, Daria Strokous and Poppy Delevingne, meandered through exotic plant formations before hitting the dance floor set against the backdrop of a moving picture of a cascading waterfall.

Moss, who arrived in an Eighties-style ensemble, disappeared for a moment, only to reemerge in a pair of mid-heel babies she had exchanged for her red-carpet sandals. The model glued herself to the stage and mouthed every word of “I’m Coming Out,” performed live by Diana Ross. The Motown legend rocked the crowd with classics including “Love Child,” “Upside Down” and “I Will Survive.” “I don’t see you move,” she teased the models boogeying at her feet, which made them go even wilder.

Up next was Mark Ronson promising to spin “whatever will make people dance.” He started with “Uptown Funk,” his signature dance track with Bruno Mars, and Prince’s “1999.” “I’m actually in the middle of working on an album on the West Coast with Lady Gaga. It’s her album, I’m producing it. She’s so talented, we had never worked together before,” he noted. “I’ve known her a little bit from before she blew up — we actually grew up three blocks from each other in New York. She’s super cool. I’m having a great time working with her,” the DJ enthused, going on to say he’s hoping to put the album out by year-end. Ronson was right on trend sporting a Seventies, black velvet tux by Maison Lance. “It’s like from this Japanese dude,” he said. “I met him when I was in Tokyo and he started sending me some suits, and it’s now one of my favorites. I’m glad I’m on trend,” he smiled.

Oliver Cheshire was taking his first Berluti tux for a spin. “I’m loving it, but I feel a little bad because I’m not wearing a tie,” the model noted, gentlemanly adjusting the collar of his crisp white shirt. “He would make a fabulous James Bond,” his girlfriend, singer Pixie Lott, suggested, tapping into the guessing game of who might take over the 007 duties after Daniel Craig’s departure from the franchise, a topic which has dominated the film fortnight’s party chatter. Asked whether the world was ready for a black Bond, Cheshire promptly noted: “Why not? One-hundred percent. And, he’s from West London, and that’s where I was born.” It will be a tough race for Elba, though, after Tom Hiddleston recently emerged as the 2:1 favorite to succeed Craig, causing British bookies to suspend all betting activity.

Lott, meanwhile, has her hands full playing Holly Golightly in “Breakfast at Tiffany’s,” her first West End play, but said she was planning to put out some singles for the summer. Further down the line, Delevingne divulged she was “devasted” about not being able to catch any movies while on the Riviera, “but at least I get to see Diana Ross,” she beamed in a silver strap dress designed by her buddy Peter Dundas for Cavalli. “I feel there is something sparkling in the air,” she noted about the flurry of shimmering gowns seen on this year’s red carpet. “Also it’s Cannes — it’s the best excuse to get dressed up and get sparkly, for once.” The model was particularly upbeat, as her swimwear collaboration with Solid and Striped was selling well. “One piece sold out twice. We can’t keep it in stock, which I’m very happy about because it’s my favorite [style]. I actually e-mailed the team saying: ‘Guys, can I get two of these just for myself? It will never exist again. What if I lose it, what if it shrinks in the wash, if something bad happens to it? I need more than just one.'”