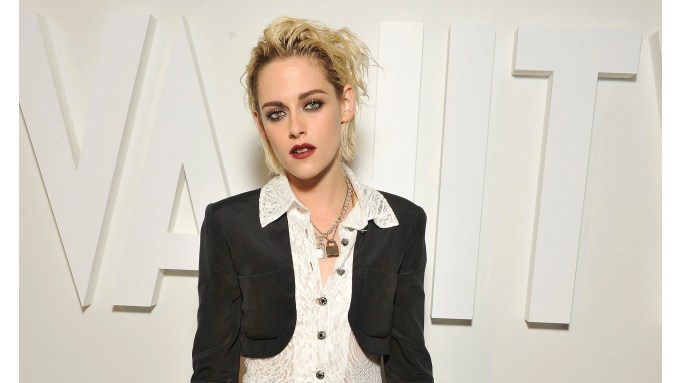 CANNES, France — Following Olivier Assayas’ “The Clouds of Sils Maria,” which was partly financed by Chanel in 2014 and won Kristen Stewart France’s César award, the storied Paris label is once more contributing to the budget of the French director’s new flick. Called “Personal Shopper,” the ghost story set in the fashion world again stars Stewart and competes for the Palme d’Or, the film festival’s main prize.

“It’s Chanel-centric — incredibly so,” Stewart teased at a dinner Chanel cohosted with Vanity Fair France at Tetou in Golfe Juan on Thursday night, drawing the likes of Blake Lively, Kirsten Dunst, Mads Mikkelsen, Naomi Watts, Susan Sarandon and Gaspard Ulliel. “And I play somebody who is very, very attracted to the shiny and beautiful and aesthetic and superficial things that she actually is quite self-hating about — yeah, it’s weird.”

Stewart added about her character: “She kinda has mad identity issues, and so the only way to tell that story really effectively and in an elevated way was to have the best of the best,” the 26-year-old mused, referring to Chanel, for whom she has become an ambassador and campaign star.

In the absence of Karl Lagerfeld, who chose to skip Cannes this season, the brand’s president of fashion Bruno Pavlovsky noted how “it was a no-brainer to be part of this,” though he would not reveal how much Chanel chipped in “out of respect for the art.”

Stewart said the Assayas film was a particularly challenging one. “I was so certain that ‘Personal Shopper’ — if I did it correctly — would absolutely decimate me — we made sure that the Woody Allen movie ‘Café Society’ [this year’s festival opener] came first, because here I play this very light, sort of youthful character. And I knew that if I did ‘Personal Shopper’ I would just be on my ass — and I was,” Stewart said, laughing in her signature self-deprecating way.

The L.A. native’s screen credits include “Still Alice” with Julianne Moore and “Welcome to the Rileys,” which helped audiences discover her as an edgy, indie actress as opposed to the teen idol she had become with the “Twilight” series opposite then-boyfriend Robert Pattinson.

After Cannes, she plans to take a leap behind the camera. “I wanted to make movies since I was 9 years old. And I just got my short financed,” she said, “so we start shooting in summer in New York.”

Much like her “Panic Room” costar Jodie Foster, Stewart started off as a child actor and had to prove her way into the major league. “I made five films in the last two years, and I vowed that before I took another acting job, I would make a short and that I would do something for myself, like —,“ she giggles, “that I would change my appearance or get a tattoo, and I did both — I cut my hair off, I mean, I bleached it out completely,” Stewart said of her bold, new look. And the ink?

The actress points to her Chanel-sleeved arm where the artwork is hidden. “Trust me, Google it. It’s f—ing everywhere.”