A bevy of models — and singer Chris Brown — attended the Blue Obsession party hosted by L'Oréal during the 2016 Cannes Film Festival. 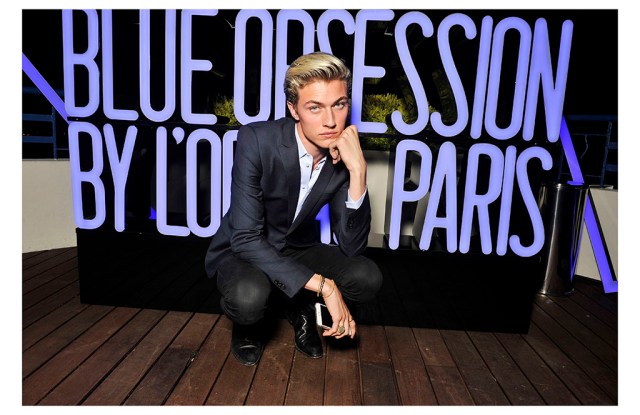 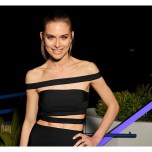 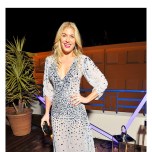 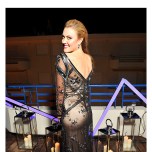 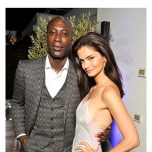 CANNES, France — L’Oréal Paris turned the air blue in Cannes on Wednesday night with a party to celebrate is new makeup line.

This wasn’t lost on Chris Brown, who huddled in the VIP section where the women gathered around Doutzen Kroes to celebrate her 10th anniversary as a face of the cosmetics giant with a tiered cake studded with lipsticks. At the other end of the terrace, guests posed in front of a large blue neon sign and drank cocktails that were — you guessed it — blue.

Not everyone played along with the evening’s dress code of “chic and blue attire” (hello Ana Beatriz Barros, in the scarlet Jessica Rabbit dress?).

Blogger Kristina Bazan, new to the L’Oréal crew, was playing by the rules. She emerged from a makeshift photo shoot in a corner of the spacious suite sporting a floor length blue gown and a new, darker hair color designed to make her azure eyes pop.

“It’s definitely a little [pressure] because all the girls look so amazing, and you definitely want to own up to the title, but for me it’s more about embracing this opportunity and you know, use it in the right way, I guess,” she said.

Fortunately, the newbie did not undergo any hazing from her more experienced colleagues. “So far, so good,” she said with a smile. “Honestly, I’ve never felt anything negative coming from the other girls or from the team. There’s really a family feeling, like everybody embraces each other.”

Lewis Hamilton stood stock-still before a logo backdrop as two people slowly circled around him with a smartphone to capture a 360-degree image for the brand’s Instagram page.

Perhaps it was the fact that Cyril Chapuy, global brand president of L’Oréal Paris, was standing next to him, but the Formula One champion seems to have taken to his ambassador role with gusto. Asked for his tips on looking good after a late night, he recommended the company’s Hydra Energetic Anti-Fatigue moisturizer.

“Honestly, it works. I’m always in the air, my skin dries out and that stuff keeps me looking fresh and young. I’m 31 and still looking good,” Hamilton said with a smirk.

For many of the guests, the party came on the tail end of a day shooting a new L’Oréal campaign, though with an arsenal of makeup artists on hand, no one was showing any signs of fatigue.

Lily Donaldson had more than one trick for dealing with dark circles under the eyes. “Tea bags — an oldie but a goodie — and then ice, and then sleep and water, and then I always use a lighter concealer,” the model said. “I usually don’t really do the teabags — but if I’m desperate…”

Lucky Blue Smith said he tends to avoid the party circuit altogether. “I might go to a friend’s party, but I’m not a big partier,” he said. So what does he like to do in his spare time? “I don’t know — hang out with friends, go to the movies, go skateboarding, go to the beach.”

Understandable, when your day job involves getting mobbed by screaming fans. Asia’s next on his travel schedule. “I’m going to the Philippines and Korea. I can’t really talk about what I’m going for, but I’m going there,” he said, before vanishing into the blue-tinted night.