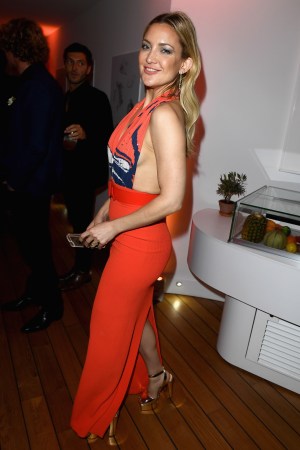 ANTIBES, France — The grand Hotel du Cap-Eden-Roc in Antibes, which stars like to call their “home” during the Cannes film festival, played host to a particularly glitzy crowd on Saturday night.

“It’s so much fun. I feel like all my friends are here,” beamed Kendall Jenner in a satin wrap dress by Mathieu Mirano, with long fringes that gently swept the ground along the hotel’s infinity pool overlooking the Mediterranean.

Jenner noted it was the first time that she was actually staying at the Eden-Roc, “but I always try to at least get lunch here,” she assured.

The model, who earlier this year launched her own label with sister Kylie, said her debut collection was well-received by retailers, as she was slowly blossoming into a businesswoman in her own right. “I’ve been raised to be one,” she said.

Dundas was in town to visit friends and make sure that “all his girls” were properly dressed for the red-carpet circuit before heading back to Italy. Duty calls. “Oh God, we are so, so late,” the designer said of his sophomore men’s collection for Roberto Cavalli slated to bow next month during Milan Fashion Week. “It’s like suddenly flying an airbus A380 [the double-deck, wide-body air jetliner] versus an A318 [a short-range passenger jet],” Dundas observed about his new job of catering to both female and male customers.

Meanwhile, Kate Hudson held court on the terrace, while Russell Crowe schmoozed with Salma Hayek and hubby François-Henri Pinault by the bar, following an early evening dinner cohosted by HBO chairman and chief executive officer Richard Plepler on the hotel’s main deck. The couple had a busy week hosting their Women in Motion Talks, which this year feature Susan Sarandon and Geena Davis among its speakers.

Fresh off the premier of “The BFG,” which reunited him and Steven Spielberg after “Bridge of Spies,” Mark Rylance aka “the big, friendly giant” revealed himself as a true fashion connoisseur, rattling off the credits of his avant-garde attire — a round-shaped, tuxedo-style overcoat by Uma Wang, matching oversize dress shirt and his signature hat. “This one I really like. It’s from Lock & Co.,” the Academy Award winner disclosed, referring to the 340-year-old hat shop on London’s St. James’s Street. “But you have to wear it like this,” he said, before adjusting the pork pie trilby to match a member of “The Rat Pack.” “Like Sinatra.”