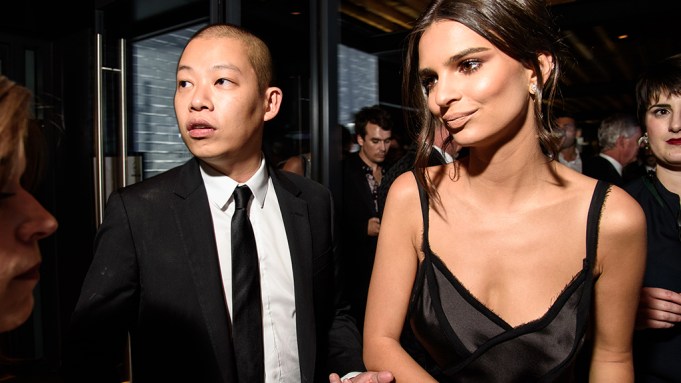 “I just want alcohol,” bemoaned a young woman as her VIP wristband was snapped onto her wrist at the entrance of Samsung’s Washington street pop-up on Monday night. It was nearing midnight, and after sitting through the three hours of dinner and awards-doling at the annual CFDA awards, everyone was feeling entitled to a cocktail. The pack of designers, both emerging and established, and their celebrity guests had come downtown from Hammerstein Ballroom to the official after party venue, conveniently located mere feet from The Standard, host of the Met Ball’s after party – a fact that was not lost on guests.  “Weren’t we just doing this?” an attendee said aloud as she walked into the room.

The tri-level space, which was complete with all sorts of Smart gadget displays (e.g. phones, watches, etc.), was a new venue for many of the guests. “I’ve never been here,” a man, apparently experienced on the party circuit, observed to his comrade. “Darling,” his date replied, “I don’t think anyone has.”

Those hoping for a quieter night found solace on the lower level, content with watching the DJ at work, whlie the top floor was brimming with fashion’s sparkliest, eager to party.

Secluded behind a harp-like screen, Phillip Lim chatted on a couch, while next to him Jason Wu remained intertwined with date Emily Ratajkowski. Across the way Selma Blair sat perched atop a stool, welcoming those who came before her to mingle.

“I loved it,” Vera Wang gushed of the awards, sweeping through the crowd early in the evening, partygoers parting in her path. “I was so proud of all the female designers, they were amazing. Donna Karan, Norma Kamali..”

Jillian Hervey, daughter of Vanessa Williams and one half of group Lion Babe, was spending her first CFDA night with date Adam Selman, the designer who still can claim fame to one of the most remembered looks to grace the ceremony (that would be Rihanna’s barely-there look of 2014). It was his first CFDA Awards night as well. “We feel like juniors in high school,” Hervey laughed. And though it was her first time at the CFDAs, she is no stranger to the fashion awards circuit. “I went to the British Fashion Awards so it was kind of the same thing,” she continued. “I’m a native New Yorker so [tonight] I just felt more connected to the designers.”