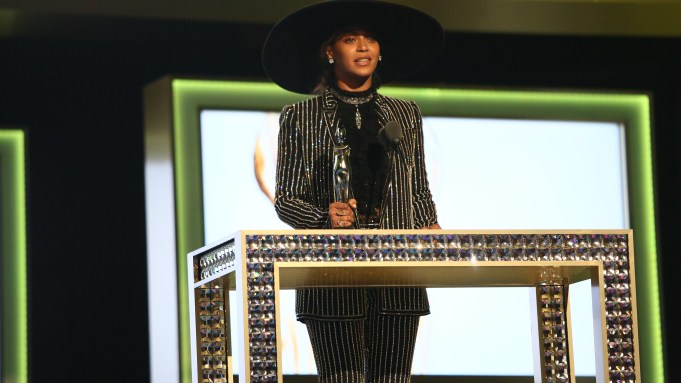 No sense in burying the lead: Beyoncé was the surprise guest/honoree at the CFDA Fashion Awards Monday night, waking up the crowd when she took the stage in a giant black wide-rim hat and striped Givenchy suit to receive the Fashion Icon Award toward the end of the evening.

The CFDA is not an organization that withholds its proximity to celebrity, but it kept Beyoncé a secret, maximizing her impact and minimizing the damage control if she no-showed. She gave one of the best speeches of the night, a very sweet ode to her grandmother, mother and uncle, the latter two of whom were responsible for the homespun, matchy-matchy ensembles of early days Destiny’s Child. Who remembers House of Dereon?

“When I wore these clothes on stage I felt like Khaleesi. I had an extra suit of armor it was so much deeper than any brand name,” said Beyoncé. “My mother, who is so fabulous and beautiful, and is here tonight…actually designed my wedding dress, my prom dress, my first CFDA Awards dress, my first Grammy dress and the list goes on and on. And this to me is the true power and potential of fashion. It’s a tool for finding your own identity and expression. It transcends style and is a time capsule for all of our greatest milestones.”

If Beyoncé upstaged the real fashion crowd, no one was complaining. The running joke is that the fashion crowd is a tough one, with an indiscernible sense of humor. “I know why you guys are here tonight. Because you’re all huge fans of comedy,” said Joel McHale, the evening’s host, during his opener. “I still believe that you love comedy even after I saw all your cameos in ‘Zoolander 2.’ But if you can do me a favor and instead of laughing at my jokes tonight, just stare back at me blankly, please.”

The audience all but obliged.

“This isn’t really our crowd, so we’re going to be counting on this table, “ said Abbi Jacobsen of “Broad City” to her tablemates, who included Chung, Prabal Gurung, Jennifer Hudson, Miroslava Duma and Alexander Skarsgård. Jacobsen and “Broad City” co-star Ilana Glazer attended with Rebecca Minkoff and were enlisted to present the Accessories Designer of the Year Award.

The CFDA changed it up this year, moving the awards from Alice Tully Hall to Hammerstein Ballroom, where for the first time in a long time a seated dinner preceding the ceremony. People were always griping that they were starving during the lengthy proceedings, so they gave them chilled lobster and chilled steak to chew on. Originally, the CFDA planned to televise the production, but it scrapped that idea last month. It was the smart move. There was no shortage of star power in the room — Olivia Wilde, Lena Dunham, Victor Cruz, Karlie Kloss, Ansel Elgort, Irina Shayk, Claire Danes, Naomi Campbell, Tilda Swinton — but at the end of the day, it’s an industry event with questionable appeal to a broader audience. Jacobsen, Glazer and Minkoff headed for the door midway through the ceremony. They missed Beyoncé, but caught Michael C. Hall’s brilliant performance of “Changes” in a David Bowie tribute.

As for the winners, Menswear Award winner Thom Browne’s gave heartfelt shout outs to his boyfriend Andrew Bolton and his team, seated at his table and showing their devotion to their leader by dressing identically in the Thom Browne uniform. Marc Jacobs was more casually dressed for short, sweet acceptance of Womenswear Designer of the Year — he wasn’t scheduled to attend the awards. Rachel Mansur and Floriana Gavriel accepted the Accessory Designer of the Year Award with a speech that was ever so slightly less awkward than last year, when they won the award for the first time. The Swarovski Awards for emerging talent went to Paul Andrew for accessories, Alex, Matthew and Samantha Orley of Orley, for men’s, and Brandon Maxwell, for women’s.

Anna Wintour was an improbable source of genuine enthusiasm when she took the stage to present Alessandro Michele of Gucci the International Award. “I know that you’ve all been looking at your iPhones,” said Wintour. “I would like to ask you all to join me in a round of applause for the incredible news that Hillary Rodham Clinton is now the Democratic Party nominee.” She might have actually “woo-ed” but the audience drowned her out. They’re With Her.

Calvin Klein introduced his friend Donna Karan for the Founder’s Award. Michael Kors introduced Lifetime Achievement Award winner Norma Kamali, who knows how incredible she looks at 70. Her next project is beauty and wellness-related. In case that doesn’t pan out she has a plan B. “Just in case, I asked Mickey Drexler if maybe he would wan to do a sex tape with me,” said Kamali. “He said it would be a very, very long sex tape.” Maybe she was onto something. J. Crew could use a sales boost.