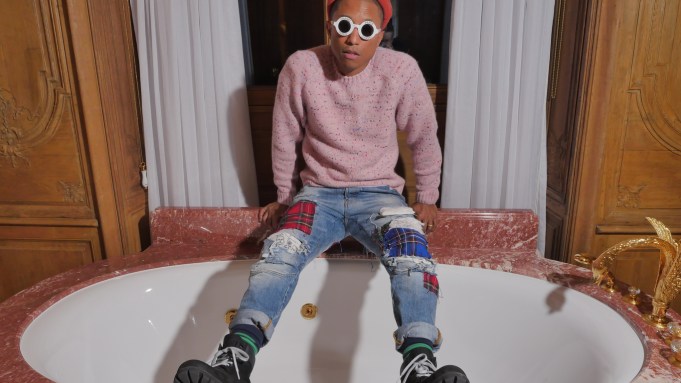 “It makes you feel like you’re royal,” Willow Smith said as she gazed up at the splendor of the Ritz Paris suite, the site of a Chanel party on Monday night.

She actually had a third eye pasted bindi-style to her forehead. “It’s a bobble eye that moves around. My makeup artist suggested it. I wish I could see it,” she said.

With her mother, Jada Pinkett Smith, looking on from a plush sofa, the teenager performed an acoustic version of “November 9,” a song she wrote as a reaction to Donald Trump’s election as president.

“Baby girl, I know you’re tired. Don’t let the world put out your fire,” she sang.

French singer and actress Cécile Cassel, just out of the recording studio in her jeans and David Bowie T-shirt, wandered through the prestige suits agog.

“It’s my first time at the Ritz. I know the song, that’s all,” she said, taking in the view of the Place Vendôme with its column framed by Christmas trees.

It wasn’t the first time for Pharrell Williams. “About 10 years ago, I did a shoot here with Catherine Deneuve,” he recalled.

And what’s important to him in a hotel room? “A comfortable bed, and a next-level bathroom,” he said.

Lily-Rose Depp, Alma Jodorowsky, Gaspard Ulliel and Taiwanese actress Gwei Lun-Mei were among guests who tread the plush carpets of the Windsor, Imperial and Proust suites.

Gwei Lun-Mei just wrapped “The Beautiful Accident,” a comedy in which a “serious lawyer” is transferred into the body of a mom.

Ulliel had his first stay at the Ritz as a seven-year-old. “I remember the high ceilings,” he said. “It’s very impressive.”