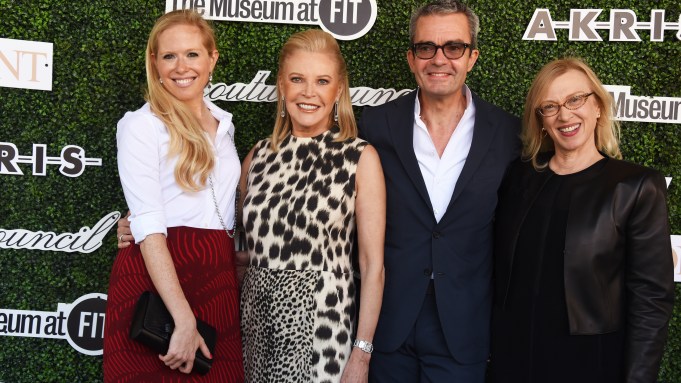 The 2016 Couture Council Luncheon gave attendees a chance to revisit a familiar haunt the day before New York Fashion Week’s official start: Lincoln Center. On Wednesday, a healthy dose of established socials — Veronica Webb, Yaz Hernandez, Audrey Gruss, Martha Stewart, Fe Fendi — trekked out to the David H. Koch Theater to lend their support to the council, which benefits The Museum at FIT and has raised about $8 million during its 11 years and Wednesday’s event netted nearly $800,000.

This year’s luncheon, the “unofficial official” kick-off to the season, also chose a NYFW newbie as its honoree: Akris designer Albert Kriemler, who this season will be showing his collection in New York for the first time instead of Paris.

“Paris is the fashion capital of couture, but it’s nice to come here once to say ‘thank you’ to our most important market,” remarked Kriemler. The FIT award, and subsequent in-person appearance it requires, served as a catalyst for the Swiss designer to choose this season for the switch-up. Akris’ new collection will be shown on Friday afternoon at Lever House in Midtown. “I wanted to find a very special place…you can go downtown and show your collection in any type of lofty space,” he said.

He also happened upon the space at the right time. “Tenants moved out before us, and tenants will move in again after us, [that] makes it so New York.”

The designer joins a strong lineage of designers awarded by the Couture Council: past honorees include Carolina Herrera, Manolo Blahnik, Michael Kors and Oscar de la Renta. “What we felt was with what Albert was doing, it was much more than the idea of luxurious minimalism,” explained Valerie Steele, director of the Museum at FIT. “That there was a real emphasis on, in [Bergdorf Goodman’s] Linda Fargo’s words, ‘Really trying to improve the quality of life through design.'”

Kriemler accomplished that task for at least one of his customers: Martha Stewart, who is a self-described devotee of his shirts. “This is my favorite blouse,” she said, gesturing to the sand-colored shirt she had paired with an otherwise white getup (after Labor Day!) “I have this in every incarnation that he’s ever made. I wear it all the time.”

At least one attendee was walking around with the tag still on and visible through the back of her Akris shirt, while Fargo and Audrey Gruss quickly discovered that they were twinning in the same leopard-print dress — all possible case studies for Veronica Webb, who is teaching a class on personal branding and marketing at FIT this fall. Webb noted that she became involved with FIT and the Couture Council initially due to convenience of location. “When Whole Foods first opened, it was right next to The Museum at FIT, and it made me go all the time. I started going twice a week,” she explained. “Every time I would go, I’d get inspired to give them something else.”

Prior to introducing the guest of honor, Fargo remarked that the Couture Council’s decision to give the Akris creative director its award is poignant on many levels. “It’s the 25th anniversary of Akris at Bergdorf’s this year,” said the retailer’s svp and fashion director. “We’ve grown a lot together and learned a lot from each other.” In a noisy world, Fargo said she appreciates Kriemler’s “refined minimalism, exquisite craftsmanship and fine fabrics. He discreetly flies under the radar, preferring a discreet life well lived. In our Instagram world, we can’t take things in in an Insta-glance anymore.”

The luncheon also paid tribute to a notable absence felt in the room: Bill Cunningham. “This is the first year he’s not with us, but he’s with us in spirit,” said FIT president Joyce F. Brown, raising a glass to toast the longtime photographer.