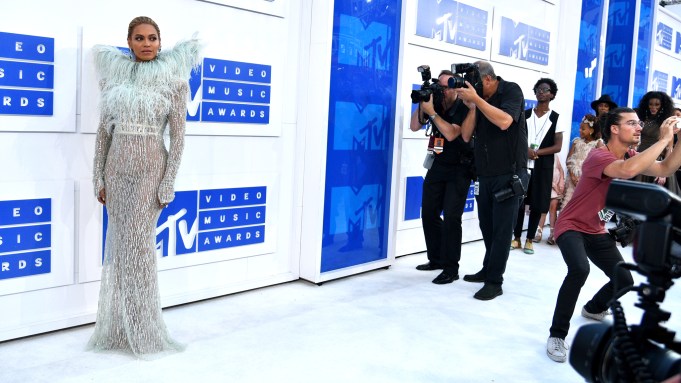 “You gotta hand it to Britney to come back here after 2007,” said a cameraman to his cohort, as they unloaded their equipment trunks. Britney Spears took the MTV Video Music Awards stage Sunday night for the first time in almost 10 years, following a performance in 2007 that stands out in the minds of many for being less than. Her previous VMA acts (think the 2001 python moment or the kiss with Madonna in 2003) are largely responsible for the reputation the awards show has for being bigger, more outrageous and less predictable than any other televised industry ceremony. Sunday, it was hyped, would be Britney’s triumphant VMA return.

Britney shared the night with some of music’s biggest names, including Beyoncé, who gave a surprise performance of “Lemonade” and, in addition to winning the top-prize Video of the Year, broke the record for most Moon Men ever won (22). Rihanna was awarded the Video Vanguard award and took the stage multiple times throughout the night to perform hits like “Work,” “We Found Love,” “Bitch Better Have My Money” and “Rude Boy.” Kanye West gave fans a video premiere of his song “Fade,” as well as a few minutes at the mic to muse about fame, compare himself to Steve Jobs and throw some Taylor Swift shade. All in a day’s work.

The VMA white carpet began with a stream of MTV stars — various cast members of the “Teen Mom” franchise, drag queens dressed in homage to Lady Gaga’s meat dress, the still-tan “Jersey Shore” stars — before the music industry’s younger names started their way down the carpet.

“We found out we were coming yesterday,” said Lion Babe’s Jillian Hervey. “I’m excited to see all the performances tonight — it’s going to be a big pop-culture moment.”

Jeremy Scott walked the carpet with model Stella Maxwell, both wearing his designs for Moschino. “It’s inspired by embroidery, mixing it all up and doing something very rock star, with old-world techniques,” Scott said. “Anything goes at the VMAs. Stella wanted to wear pants and do something out there, instead of just wearing a dress.” At the top of his list for the evening? “Rihanna, Rihanna, Rihanna, Rihanna!” he said, as Maxwell batted her lashes in agreement.

“Honestly this was the second thing I tried on. I think with the VMAs you can push the boundaries a little bit,” said Hailey Baldwin, in a George Chakra jumpsuit. “This is my first time here — I’m excited to see Rihanna and Britney. The snake performance is obviously iconic, and when she and Madonna kissed, I was a young child sitting there like, ‘Oh!’”

“This is Erika — aw s–t, how do you say it?” said JoJo, looking back to her publicist for help with Erika Cavallini’s name. Her black and gold getup was selected to match her vibe for her upcoming comeback album, set for an October release. “I knew that I wanted to feel confident. I tried on this very sparkly silver dress and I felt like I was trying too hard, I didn’t feel like myself,” JoJo said. “I knew it was a bomb dress but I just wanted to feel cool and comfortable. I’ve been on the road and I just wanted to feel like I should feel like myself.”

Shameik Moore, star of Netflix’s hit “The Get Down,” bravely sported an oversize shearling jacket better suited for New York in February than the end-of-August heat. “I wanted a nice coat. I’m not hot, everybody else is hot,” he said with a shrug.

The white carpet was only about halfway over but already his VMAs had perhaps already peaked. “I was excited to see Beyoncé, I just saw her, but I would like to officially meet her,” he said. His ideal meeting with the superstar would go a little something like: “her telling me that she loves my work.”