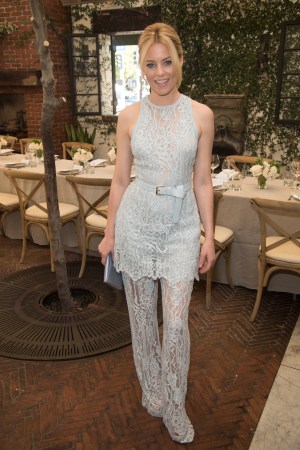 On Friday, Vanity Fair and Stuart Weitzman got in on more Oscars pre-party action to toast actress-director-producer Elizabeth Banks with an al fresco lunch at A.O.C. The event also benefitted the NGO Vital Voices Global Partnership. In keeping with its theme of training and empowering emerging women leaders and social entrepreneurs, Banks invited some of her friends, including Malin Akerman, Sarah Chalke, Brittany Snow, Juno Temple, Susan May Pratt and producer Naomi Scott and husband and actor Adam Scott.

“My boss Donna Langley introduced me to Vital Voices,” said Banks, of the Universal Pictures chairman (Banks’ and husband Max Handelman’s Brownstone Productions has a deal with the studio). “So what reason isn’t there to have a lunch? Plus I can get drunk with all my friends.”

She wasn’t the only one sipping on the restaurant’s signature Green Goddess cocktail. Over by the bar, Pratt, who met Banks through a then-boyfriend who appeared with Banks in the 2001 movie “Ordinary Sinners,” said, “We bonded because we were both skinny girls who loved to eat. Now we do a book club together.”

It does seem that, in Hollywood, all roads lead to Banks. “We met when she did an episode of ‘Scrubs,’” said Chalke. “Banks is the best. We’ve been friends for like, 10 years.” Chalke wasn’t partaking in the cocktails because she’s due with her second child in May. “It’s coming out the same time my movie, ‘Mother’s Day’ is coming out,” she said, irony if there ever was any.

Snow, who starred in the Banks-produced “Pitch Perfect” movies, the second of which Banks directed, said, “She’s one of those women who does it all. She’s a role model in that way.”

Banks also liked to joke that she’s Elie Saab’s fit model. “He and I are like this,” she said while making an eye-to-eye gesture. “His clothes just fit my body. That’s why I wear them so much.”

Lily Aldridge, who appears in Weitzman’s latest ad campaign, was on hand in one of his custom creations, a navy Nudist sandal he created to match her navy Brock Collection skirt. “It’s nice that he made these for me. Hopefully everyone will be able to buy them soon.”