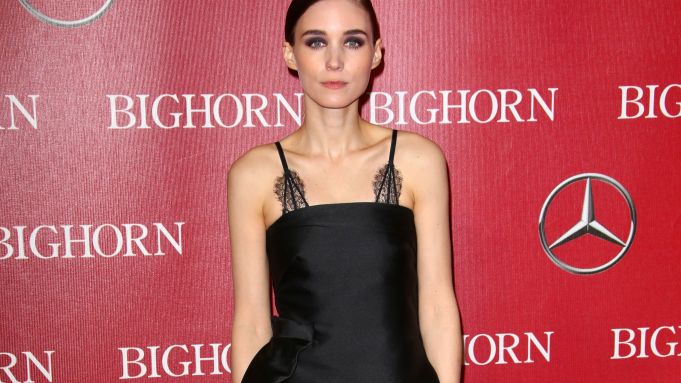 Vikander could hardly believe the star-studded group that had turned out. “I’ve seen the red carpets from this film festival for years and the people who have been awarded,” she said. “To be in the same room as a lot of people that I grew up admiring? It’s very exciting.”

“It’s quite glamorous,” added Ronan, honored for her work in “Brooklyn.” “I went over and signed a few photos [for fans] and everyone said they really liked the film. To know that there’s a real appreciation for film at the first event you go to of the year is a good way to kick it off.”

Excitement aside, Mara couldn’t quite escape the chilly weather as she navigated the red carpet. “It’s so cold,” she said while shivering in a black Lanvin cocktail dress. Still she was pleased to accept the Spotlight Award for her work in “Carol.” “The last time I was here was with ‘The Social Network’ and that was really special. It was my first experience with anything like this. It’s special to be back here with this film.”

Her “Carol” co-star Blanchett embraced the chilly weather, having selected a more sensible long-sleeve dress by Marc Jacobs. “It gets to 120 [degrees] here. It’s nice to be here when it’s a little cooler,” said Blanchett.

“How was the beef?” Depp asked the audience, as he accepted the Desert Palm Achievement Award from his “Black Mass” director Scott Cooper. “I hope you’re planted in your seats. This might take thirty minutes…. I’m not good at this stuff.” In actuality, the speech was closer to five minutes, but Depp did take the time to thank his wife Amber Heard “for putting up with me, for living with all these characters, which can’t be easy. It’s hard for me. It’s gotta be hard for her.”

Eventually, after a long night of cocktails, hobnobbing, dinner, speeches, and film clips, the night’s final honoree approached the podium. “You guys are almost out of here,” promised Damon. “There are a lot of people I’d like to thank, but I won’t…. You’re welcome.” Still, he couldn’t help but rib one good friend who wasn’t in attendance. “Ben Affleck won this award a few years ago and insisted that everybody refer to him as The Chairman, so I guess I’ll return the favor when I get back to LA.”