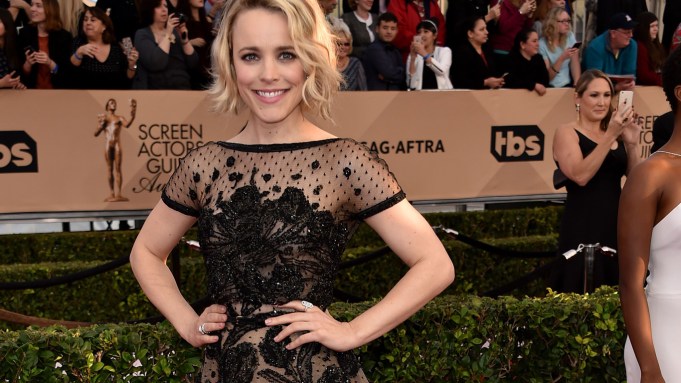 While “It” Girls Alicia Vikander, Brie Larson and Saoirse Ronan were among the SAG Awards newbies, others have practically grown up on the show’s red carpet. “Another day, another gown,” quipped 16-year-old Kiernan Shipka, whose seven years on “Mad Men” have rendered her quite the pro. She already knew the drill on her purple gown. “It’s by Erdem. I liked the color. I liked the sparkliness and I also liked the shape. I thought it was pretty and flowy,” she said.

The actress then reminisced about attending her first awards show at age six. “Working with Janie Bryant on the show was super influential,” she said. “Wearing those kind of clothes taught me that style could tell a story and that it could express something.” Asked how her look has since evolved, Shipka said, “My style has become present. I was six when I started. I wore whatever I wore then. But I really developed any sense of style while I was on the show. I was certainly influenced by it.”

Sarah Hyland of “Modern Family” said she experienced a similar red carpet journey. “Oh, Jesus! My style has evolved tenfold,” she said. “I don’t like to regret fashion moments because it’s what I liked at the time, but sometimes you’re like, ‘What the hell was I thinking?’ I was 19 at my first SAG Awards, so of course my style is going to go through some type of evolutionary journey. I feel like I’ve become more of a woman.” As for her J.Mendel, she selected it because it was “super simple and casual and laid back, but has the slit, so it’s a bit sexy.”

Meanwhile, “Scandal” star Katie Lowes said it was her first time at SAG and her first custom gown by Christian Siriano. “We just put our heads together. We wanted to do something classic Hollywood, but have a little modern twist with the bar going across the top. And I love red. It’s my grandmother and mother’s favorite color.” Lowes was doing duty as SAG’s “Social Media Ambassador” tasked with taking behind-the-scenes pictures. “I’m hoping to take a picture with Leonardo DiCaprio,” she said. “That would be huge, but I don’t think he would.”

“Transparent” actress Hari Nef may have also been a SAG Awards virgin, but the model-actress worked the carpet like a pro. “This is Maison Margiela by John Galliano. What a dream,” she said. “I’m super lucky to work both in Hollywood and in fashion, so I have an extra push for these fashion moments, and I got this beautiful dress from spring 2016.” Meanwhile, “Orange Is the New Black” actress Lori Petty wore a custom creation from Los Angeles designer Ashton Michael. “I wanted to wear someone young and new and fresh,” she noted.

Petty’s “OITNB” costar Laura Prepon was just looking to mix things up. “Last night [at a party], I rocked this three-piece suit that I loved, so tonight I wanted to be really feminine and girly and wear white.” As for what she’s learned since walking her first red carpet, Prepon said, “You can be stressed about it, but some pictures are going to be good, some aren’t, and that’s OK.” She continued, “When you leave the house, you’re in the car and your dress is getting wrinkled and your hair is blowing around and you’re sweating. It’s a lot, but now I feel like, ‘Eh. What are you going to do?’ This is a part of it and it’s fantastic, but it’s about the work and when I remind myself of that, it takes the stress out of it.”

Elsewhere, sisters Rooney and Kate Mara — both in Valentino — hit the carpet. They walked separately, but trailed one another down the line. Yet fans in the bleachers went wildest for O’Shea Jackson, Aldis Hodges, Corey Hawkins, Jason Mitchell and the cast of “Straight Outta Compton.” They hammed it up for photogs — while Susan Sarandon photobombed the crew. “Who’s that?” Julia Louis-Dreyfus whispered to her publicist before getting a glimpse of the group.

Once backstage, Queen Latifah spotted Vikander. “Her dress is bomb,” she said of the Louis Vuitton gown. Clutching her Best Supporting Actress award, the “The Danish Girl” actress cooed, “I don’t know how many hours it must have taken them to put all these sequins on my gown.”