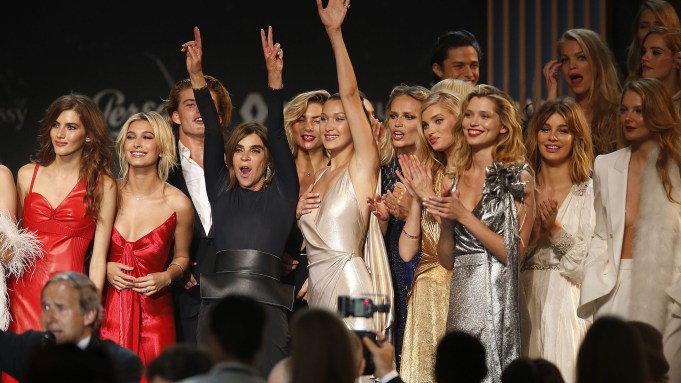 CAP D’ANTIBES, France — Hollywood’s A-list gave the French Riviera a heady taste of its Golden Age glamour for the 24th edition of amfAR’s annual Cinema Against AIDS gala, and netted more than $20 million.

The night’s theme charged the gardens of the ritzy Hôtel du Cap-Eden-Roc with even more star-power than usual.

Decked in Art Deco accents including a music hall balcony onstage, graduated wall sconces and ostrich-feather palm trees, the venue set the stage for an evening of Hollywood glamour. Leonardo Di Caprio and Tobey Maguire looked particularly at home in this decor on par with their 2013 “Gatsby” film.

Couturier Jean Paul Gaultier, accompanied by Coco Rocha, was delighted by the cinematic setting, reminding that he had come to fashion through movies.

“You wouldn’t put Woody Allen in [the Golden Age] but he’s my favorite of all times,” said rapper A$AP Rocky who nonetheless looked dapper and on-theme.

“I can give you diva, but I can’t give you boob,” exclaimed Tracee Ellis Ross adjusting her red feathers and lace gown as she arrived with Jeremy Scott. “It’s like L.A. and Cannes for us. She’s channeling Diana Ross, because Miss Ross is in her blood, and that’s like a blood right,” the designer said, promising they would exercise the right to dance at dinner.

Presenting the event were emcees Nicole Kidman and Dustin Hoffman. They were joined by Chastain, Smith, Chris Tucker, David Beckham, and others to present auction lots and speakers, including amfAR’s chairman  Cole and Harvey Weinstein, who pledged to get Silicon Valley on-board for a technologically enhanced quest for a cure to AIDS.

Bidders could go for the material world with art works by the likes of Alec Monopoly, JR and Richard Hambleton on the auction block; or they could favor experiences such as meeting the Dalai Lama or playing a 90-minute soccer match against David Beckham — the match and following dinner went for 350,000 euros, or $392,000.

Among the lots going under the hammer was a set of 10 photographs of stars like Katharine Hepburn or Marlene Dietrich by late Hollywood portraitist George Hurrell.

“Some of the finest white people ever,” Smith quipped, before taking over the auctioneering from de Pury in a rapid-fire scat improvisation to the delight of the audience, which included Diane Kruger, Adrien Brody and a bevy of designers — Gaultier, Dsquared2’s Dean and Dan Caten, Philipp Plein and Balmain’s Olivier Rousteing. To sweeten the deal for the winning bidder, the actor threw in a kiss on the cheek in an on-the-spot selfie with fellow actors Chastain, Tucker and Uma Thurman.

But bidding turned fierce for Carine Roitfeld’s “Golden Age of Hollywood” fashion curation. Presented on a cast of models du jour including Bella Hadid, Irina Shayk, Karolína Kurková, Hailey Baldwin, Barbara Palvin, Jasmine Tookes and Natasha Poly, the selection included a golden open-back mermaid gown from Alexandre Vauthier, a white robe worn over a pink jumpsuit from Chanel, a red leather gown from Louis Vuitton and a black Lurex kimono from Tom Ford. Not forgetting a selection of Harry Winston jewels provided by the brand, a main sponsor of the event. The set of 30 looks went for a cool 3 million euros, or $3.4 million.

Between lots, Motown entertainer Diana Ross had guests out of their seats and crowding the foot of the stage as she sang “I’m Coming Out,” “Ain’t No Mountain High Enough” and “I Will Survive.”

Ora, who had changed from her earlier pink Chanel dress to a vivid red number, took to the stage and performed “Your Song,” the first single of her upcoming album co-written with Ed Sheeran.

Former Jonas Brother frontman Joe Jonas and DNCE put the audience in the mood for the Moncler after-party with a lively rendition of their Billboard-anointed debut single “Cake by the Ocean.”

After raising more than $20 million, the crowd certainly deserved to kick back. Redemption’s creative director Gabriele “Bebe” Moratti revealed, however, his second most important date after amfAR was “going to a shady falafel place and doing take-out” with model and actress Angela Lindvall the next morning.