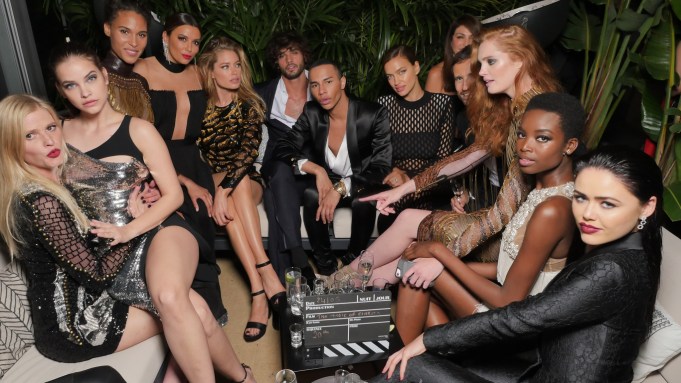 The glitzy event marked 20 years of partnership for L’Oréal Paris with the Cannes Film Festival.

Cozying up with a bevy of models including Lara Stone, Doutzen Kroes, and Irina Shayk, Balmain’s Olivier Rousteing, who was in town to celebrate the soon-to-be-launched limited-edition capsule collection of lipstick he designed for L’Oréal Paris, was still buzzing from attending the premiere for Sofia Coppola’s “The Beguiled” an hour earlier.

“The red carpet of the Palais des Festivals, for me, is a French institution. It’s pretty overwhelming with the all crowds and all the different universes coming together, with this mix of fashion and film, intellectual and popular culture, it’s incredible,” he said.

“Sofia Coppola is such a wonderful artist who has this gift for mixing music and the world of cinema, in a universe that is at once pop and intellectual,” added the designer who also shared some words on his L’Oréal hook-up.

“France is undergoing a major cultural and political shift, and I’m so proud of this collaboration with a brand that defends diversity, and which contributes to helping France radiate on an international level. These are values shared by Balmain Paris, and we connected on three key themes: know-how, diversity, and modernity.”

As the music cranked up, the revelers flowed through the space’s makeup counters and the cinema club, where guests climbed into a giant box of popcorn to pose for pictures.

“I’m hungry, I’m hungry,” yelled Anna Cleveland, chasing after a man who’d run off with a giant piece of popcorn made from polystyrene. Cleveland said she’d had already got to test the lipsticks. “Lipstick must stick,” she quipped. “Tonight I have a mattified lipstick, and that’s the tip.”

Meet the Winners of the 2017 Chopard Trophy Award