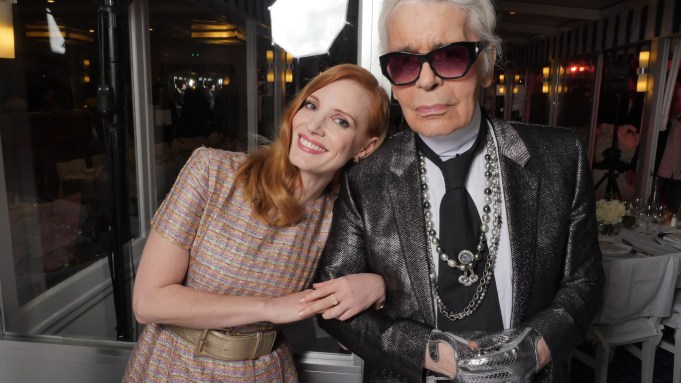 BIG FISH: In keeping with tradition, Chanel and Vanity Fair France took over Chez Tetou, a fish restaurant famous for its bouillabaisse, for their annual Cannes Film Festival dinner on Wednesday night.

Lagerfeld confessed he had “never been to the Cannes Film Festival in my life. For me it’s Monte Carlo or Saint-Tropez – and nothing in between.”

Jessica Chastain, a regular at the dinner, shared her favorite dishes. “I love the tomatoes!” said the actress who was showing no signs of fatigue, despite viewing three films a day as one of the festival’s jury members.

“I’m going to be sad when it ends, I love my jury, and I’m learning so much. What excites me about my profession is being able to talk to other artists,” she sighed.

Also in attendance was the French actress Clotilde Hesme, who is on the Cinéfondation jury for the short film category. The jury president is Romanian filmmaker Cristian Mungiu, while the Oscar-winning “Moonlight” director Barry Jenkins is also taking part in the judging. In her next film “Diane a les épaules,” (Diane Can Take It,” in English) Hesme plays a surrogate mother who carries a baby for her friends.

Hoffman, who on Sunday performed a spontaneous dance with Emma Thompson on the red carpet for the premiere of the Netflix-backed movie “The Meyerowitz Stories,” co-starring Adam Sandler and Ben Stiller, said: “We got a standing ovation, which was very moving. It has to be my favorite memory from Cannes.”

Meet the Winners of the 2017 Chopard Trophy Award