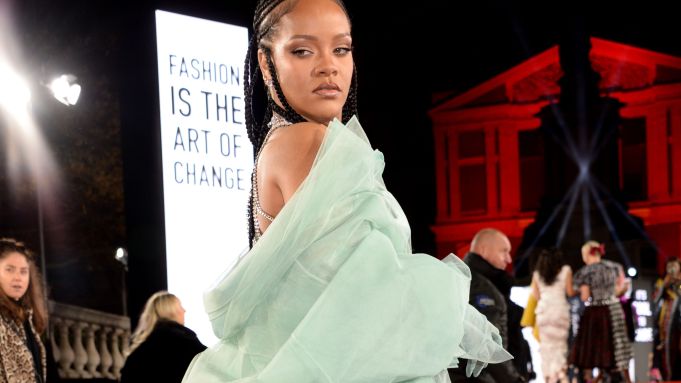 LONDON — The Fashion Awards was a star-studded evening with surprise appearances by everyone from Rihanna to Janet Jackson, Julia Roberts and Donatella Versace.

But the big winner of the evening was Bottega Veneta’s Daniel Lee, who scooped four awards: brand of the year, accessories designer, British women’s wear designer and designer of the year.

The annual event at Royal Albert Hall kicked off with a White Show by Central Saint Martins students, who presented all-white creations — from giant pillows, to puffers and corseted dresses — to the sounds of British rapper Little Simz. She delivered a politically charged performance with a song that spoke about power and femininity.

Hosts and speakers sprinkled political commentary during their presentations throughout the evening.

“I don’t really understand Brexit, but I do understand fashion and crumpets and Meghan Markle and Harry Styles,” said Tracee Ellis Ross, the Emmy-winning actress and this year’s presenter, who waltzed into the room, singing a song.

“Mistress of Fashion Awards, I know I won’t get bored. Fashion is my gem. Just look at this frock and yes it’s Richard Quinn,” she sang, swirling in her floral crystal-embellished cape by Quinn.

She proceeded to call out some of the evening’s high-profile guests: Tom Cruise, Versace, Giorgio Armani, Cate Blanchett and Roberts.

“Guys, Julia took the Tube because it’s two stops from ‘Notting Hill.’ See what I did there?” said Ross, alluding to Roberts’ blockbuster role in the Nineties film.

But it was the flash appearance by Rihanna that had guests beaming with excitement — a rumor of her appearance had been swirling among industry figures for days. She was in London to accept the Urban Luxe award for her brand Fenty. To add to the star factor, Janet Jackson made a surprise appearance to present her with the accolade.

“You’re loved for your style, you’re respected as an artist, entrepreneur and for the first black woman to start a brand with LVMH,” said Jackson, who took to the stage in a baby blue body-hugging dress and taffeta coat.

“First of all, I mean Stephanie Phair, that’s why you’ve been grabbing me so tight, huh?” Rihanna said, addressing the British Fashion Council’s chairman.

“Thank you so much for believing in me as a young black woman and giving me the opportunity to do what I love the most,” she added with special thanks to the Arnault family.

The evening’s other scene-stealer was Lee, whose square-toe mules, leather pouches and minimalist aesthetic have caused a retail and street-style storm alike. Bottega’s new creative director and a Phoebe Philo alumnus set a record in taking home the four awards.

Lee first accepted the brand of the year award from model Rosie Huntington-Whiteley, who is known for her myriad Instagram selfies sporting Bottega accessories.

During his brief acceptance speech, he thanked Kering’s François-Henri Pinault for taking “that initial gamble” on him.

Accepting his second award of the evening for accessories designer of the year, he said: “For me, accessories are the key to modern dressing and I’m incredibly proud so many of you choose to live with our pieces every day and to express your style,” said Lee.

“Little over a year ago most of you didn’t know me but I honed my career working behind the scenes.”

Donatella Versace, looking her usual glamorous self in a metallic pink Versace gown, accepted the prize on Jones’ behalf.

“As you see, I’m not Kim Jones, but it’s truly an honor to accept the award for my good friend. He’s in Miami putting the last touches to his show and it’s going to be fabulous, as always,” said Versace, saluting Jones for being the first designer to marry luxury and streetwear.

In the emerging designer categories, Bethany Williams and Rejina Pyo won for the men’s and women’s categories, respectively.

“Third time nominated, and first time I didn’t prepare my speech,” said Pyo, who has been building a thriving business in the contemporary sector and a legion of fans for her easygoing, colorful aesthetic.

Later, Anna Wintour and Lady Amanda Harlech made an emotional tribute to Karl Lagerfeld. “Those who have known Karl’s glamorous public image and pampered cat might be surprised at the news of this scholarship,” said Wintour.

During the ceremony, Chanel revealed plans to sponsor an MA scholarship through the BFC’s foundation.

“Karl would have loved this. No one understood the need for new generation designers more than Karl,” added Harlech.

Dior and LVMH Moët Hennessy Louis Vuitton also made a donation to the BFC’s foundation this year.

Other winners included Naomi Campbell, who won the Fashion Icon award, handed to her by Jony Ive. He saluted the supermodel for being “disarmingly honest.”

Campbell, who sparkled in an embellished Alexander McQueen dress, spoke of having “an out-of-body experience,” and pointed to being “the first woman of color to receive this award.”

She paid tribute to some of her own icons, including Iman, Tina Turner and her own mother, among others.

Diversity — or the lack thereof — in the industry was another topic that was repeatedly addressed.

Model of the year Adut Akech echoed Campbell’s words, asking everyone to acknowledge that “it is not usual that someone like [herself] wins this kind of award” and encouraged younger women to believe in themselves “because if a refugee [like herself] can do it, so can you.”

The Designer’s Designer — a new award by the BFC to coincide with its new membership scheme — was handed to Christopher Kane by Kylie Minogue, in a neon yellow lace number by the designer.

The ceremony ended with a Giorgio Armani runway show, after which Armani received the outstanding achievement award from an elegant Roberts, who was wearing a black sequined jumpsuit by Armani, and Cate Blanchett, also in a showstopping tulle Armani gown.

“He is known as the King, the man, the maestro. There’s no one who could be more deserving,” said Roberts to finish off the evening.