Guests including Coco Rocha and Stacy Martin braved the rain to attend the event. 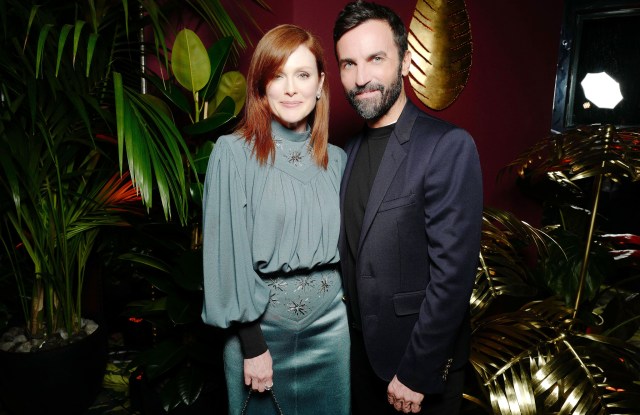 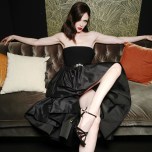 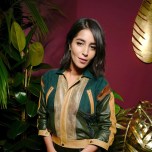 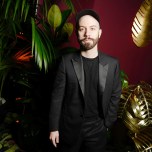 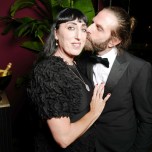 CANNES, France — Leave it to Rossy de Palma to bring a pinch of spice to rainy Cannes. Wafting her black fan, the actress joined guests including Coco Rocha, Xavier Dolan and Julianne Moore at an intimate dinner cohosted by Madame Figaro’s Anne-Florence Schmitt and Louis Vuitton’s Nicolas Ghesquière on Saturday night at the Club by Albane. Cyril Lignac was manning the stove.

“A fan is always necessary because, even if it’s raining, it might be very humid. You might have hot flushes or want to have an air of mystery, as if you’re having deep thoughts,” she said, holding it against her face and peering over.

De Palma was in town to support Pedro Almodóvar for the premiere of his film “Pain and Glory.” “I already attended the premiere in Madrid and cried, but here yesterday was beyond words. It’s such a beautiful film, it’s a masterpiece, pure cinema, with a lot of tenderness,” she said. “For me, he’s like family; we’ve known each other almost 35 years.”

The actress will be heading to Dakar Fashion Week in June to present an exhibition of self-portraits with her face covered with fabrics.

“I’m great friends with Adama Paris who organizes it, there’s a lot going on, we’ll be doing a six-page special for Spanish Vogue,” she added. “I’m very happy to be an echo for African fashion and talent. Actually, hello! When are we going to get an African Vogue?”

Rocha, who will likely be walking in the amfAR fashion show next week, said she’s looking forward to seeing the world premiere of Quentin Tarantino’s latest movie, “Once Upon a Time in Hollywood” in Cannes. “I’m really into glamour and Hollywood, and the fabulous times, well I’m assuming they were. And also just  experiencing Cannes. I’m a newbie at it, this is my third, and each time it’s different,” she said adding that, for her, Cannes symbolizes the beginning of spring — “even if it’s raining.”

“If you’re in the cinema all week, it doesn’t really matter,” piped up Stacy Martin, who is on the Cannes Cinéfondation jury. “Finally, I get to watch films,” enthused the actress who has just started filming “The Night House” alongside Rebecca Hall. “It’s a horror movie. I’m really bad at horror movies, I can’t even watch trailers because they creep me out so much. I thought, the only way to cure a phobia, is to just tackle it head on,” she said with a nervous laugh.

French musician Woodkid revealed that he has just released an album with Ghesquière — titled “Woodkid for Nicolas Ghesquière — Louis Vuitton Works One” — compiling all of the soundtracks from the designer’s shows for Vuitton from across the past two years.

On the way they work together: “In general, we meet at the mood-board stage and work with the first ideas and big themes,” he explained. “We work in a very similar way in the way that we try to make the general themes collide together and see what the results are. Nicolas does this with the fashion and I try to do it with the music, too.

“The work of Nicolas is so complex, and the aim is to take his themes and find the exact translation in music.”