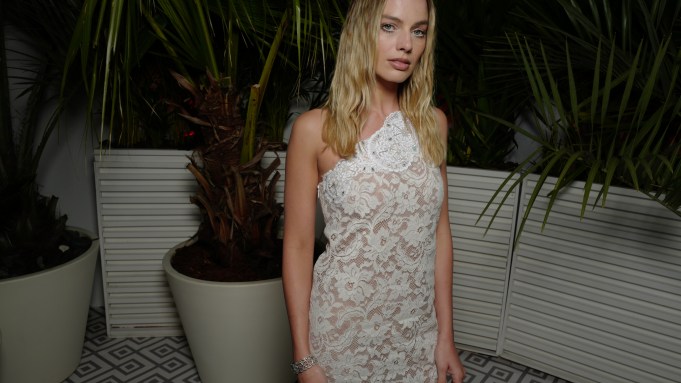 CANNES, France — Margot Robbie is probably the most sought-after name in this year’s Cannes Film Festival, having just walked the red carpet alongside Leonardo DiCaprio and Brad Pitt to premiere the much-anticipated Quentin Tarantino drama “Once Upon a Time in Hollywood,” in which she plays the female lead.

When she made a flash appearance at the intimate cocktail and dinner organized by Vanity Fair and Chanel Wednesday night — she also has just been revealed as the face of Chanel fragrance — she lit up the rooftop of the JW Marriott hotel with photographers and guests alike, gathering to take a shot of the actress.

The only one who had to refuse a request for a joint picture was Elle Fanning, given her role at this year’s festival as a member of the jury.

“Stay away,” joked Robbie, who was dressed in an elegant, pared-back white lace number by Chanel.

“We can still talk, it’s good to see you,” Fanning replied. She said she’s been having to keep mum about her entire experience until the winner of the Palme d’Or is unveiled on Saturday. “People ask me what I thought of a movie and I’m not allowed to say anything, I’m afraid of appearing rude. But it’s been the most amazing, rewarding journey and I’m trying to take it all in,” Fanning said.

Soo Joo Park, another Chanel ambassador, was also in town to walk the red carpet for the premiere of “Once Upon a Time in Hollywood.”

“It’s incredible, I don’t want to give any spoilers, but I’ll just say, make sure you watch it until the end,” the model said. “I’m both a Chanel and L’Oréal ambassador so I saw it as an opportunity to mix the two. I wore Chanel ready-to-wear and had L’Oréal makeup on. Now I’m getting ready to fly to [South] Korea for Chanel’s Métiers d’Art show, which is a special moment, as it’s in my home country.”

Labaki, who won the Jury Prize for her film “Capernaum” last year, spoke about the joy of returning as the president of the jury for the “Un Certain Regard” category.

“I can’t be happier than being in Cannes and watching films all day, knowing that it’s all going to be good films, because it takes a good film to make it to Cannes,” said Labaki, who shot to fame when she told the story of the 12-year-old Syrian refugee Zain Al Rafeea, living in the slums of Beirut, via “Capernaum.” “The success of the film was not expected because it was a small, homemade film we did on our own in Lebanon, with actors from real life who have no experience acting and are coming from circumstances of poverty. When you have this kind of exposure their voices resonate so much louder and it brought attention to the issue.”

Labaki added that she is now working on a follow-up documentary that will show how the lives of the children in the film went on to develop.

Another up-and-coming name embraced by Chanel is Valerie Pachner, who is starring in the historical drama “A Hidden Life” competing in this year’s festival.

“It’s been an emotional moment for me. I’m not thinking about the competition, being here is what counts and the film itself. We shot the movie in 2016, so I’ve been waiting for this for a long time,” Pachner said. “I was drawn to the film’s message about following what you think is right no matter what, I thought that’s so strong.”

Pachner has also just wrapped the filming of the new “Kingsman” movie and has been using her time in Cannes as an opportunity to experiment more with fashion. “It’s something that’s quite new to me, but I’m starting to learn that it’s all in the details and that fashion is beyond superficiality,” she said, pointing to her chiffon-layered blush pink dress by Chanel.

Tilda Swinton on Opening Cannes, Her Next Film Project and the Power of a Suit