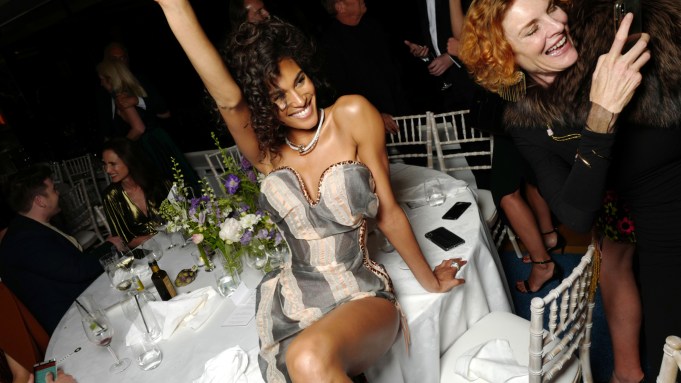 CANNES, France — In what is proving to be a quieter Cannes than years past in terms of parties, leave it to Charles Finch to reignite the glamour and fizz the festival is known for, bringing in the Gipsy Kings to entertain guests at his 10th annual Finch & Partners Filmmakers Dinner at the Hôtel du Cap-Eden-Roc on Friday. Rita Ora leapt out of her chair to dance with the musicians, with guests including Willem Dafoe, Monica Bellucci, Amber Heard and Liam Payne clapping along.

“Fashion and show business — sometimes it’s just about dressing people in the industry, but to be here in this room, with this much talent.…We could use a little warmer weather, but other than that it’s pretty perfect,” said Kors, nodding toward the terrace with its dramatic stormy sea views during the cocktail.

The designer had dressed most of the female guests, exceptions being former Sonia Rykiel designer Julie de Libran, who sashayed by, cocktail in hand, in a long, black sequin-embroidered dress that she had designed herself, ringed with layers of gold fringing. De Libran, who recently teased on Instagram she had a #newadventure coming soon, was still keeping mum about the details.

Catching up with friends by the bar, Evan Ross, who’s busy working on a solo album with his wife, Ashlee Simpson, revealed he’s about to start shooting the Lee Daniels-helmed Billie Holiday biopic, “Billie.”

Gazing at the gray sea, actress and L’Oréal Paris ambassador Andie MacDowell said she’s never yet had to face one of Cannes’ rain-lashed red carpets. “I’ve been here when it’s cold, but don’t think I’ve had to use an umbrella,” said MacDowell, who has the thriller “Ready or Not” coming out this summer. “It’s actually a tongue in cheek horror movie, it’s funny, it’s got a sense of humor,” she said.

Heard, who swept into the event on Finch’s arm, revealed she’s working on more serious projects. The activist actress said she hopes next week to present a bill for cyber civil rights of the Internet Privacy Protection Act with California Representative Jackie Spear. “I’m very excited about that,” she said.

Seated in the corner of the room, meanwhile, Dafoe regaled friends with tales of being lost at sea, sharing details of filming “The Lighthouse” the second film of Robert Eggers’, with its world premiere as part of the Director’s Fortnight scheduled to take place the following night.

“I’ve been here in lots of different capacities, so it’s always different. I was here when ‘Wild at Heart’ won the Palme d’Or, I was here as a jury member, I was her for ‘Antichrist’ — that’s not a list, each one of those things was a very, very different experience. Cannes is a live thing for me,” said the actor.

“Two people: me and Robert Pattinson, and they don’t get picked up. It was full-on in the elements, and the elements told us what we had to do.”

Eva Longoria On Hollywood’s ‘Sisterhood and Community of Information”

Elle Fanning on Growing Up in Film