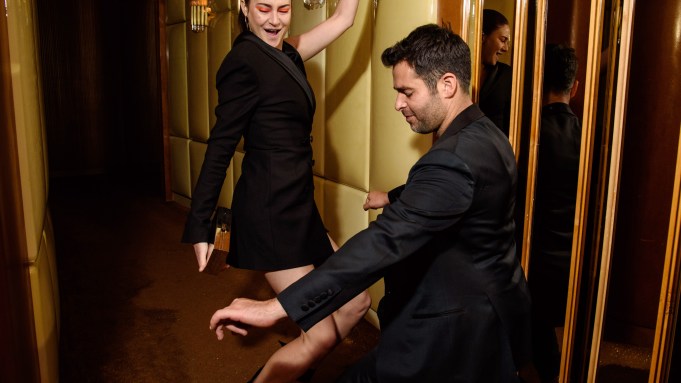 After trekking out to the Brooklyn Museum, the fash-pack had to trek back into the city to keep the party going. While many of the night’s more seasoned designers seemed to call it a night after the big hurrah, those newer (and less jaded) to the scene were eager to swan up to the Top of the Standard, where the Boom Boom Room was in full swing.

Team Thom Browne, which included Lee Pace and Xiao Wen, arrived together, making a beeline to a side sunken lounge to dance. Nearby, Kit Keenan nursed what one can only assume was a mocktail, as Karolina Kurkova danced around. Shailene Woodley hammed it up with date Jonathan Simkhai; Paul Smith, Ruby Aldridge, Presley Gerber, Peter Som and Marianne Rendon also partied throughout the room.

Laura Kim and Fernando Garcia arrived with Hanne Gaby Odiele, while Kerby Jean-Raymond occupied a back corner with Lala Anthony, A$AP Ferg and DeRay Mckesson; Joan Smalls sat solo on a couch nearby, glued to her phone (perhaps already staging her exit uptown to Gigi Hadid and Virgil Abloh’s unofficial party at L’Avenue at Saks).

As they dipped out around midnight, Womenswear Designer of the Year winner Brandon Maxwell ducked in for a celebratory lap, before joining the cool kids uptown.